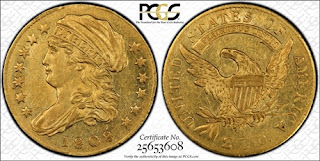 Discussion of rarity ratings for Capped Bust Half Dollars and the JRCS vote on participation in the Newman Numismatic Portal dominate this week's contributions.

First, a correction from the editor:

You will also find other useful information there.

I would like to voice my support alongside Brad Karoleff's to scan the JR Journal to the Newman Numismatic Portal.  I can only think of positives for our club and its educational and research missions.  We are a very small slice of a large community of collectors and attracting new members is essential.

Anyone who attends a local or regional show, or even the major auctions, will see throngs clamoring for high grade coins of the twentieth century; if but a few caught our passion (malady?) it would be a great addition to the study and stewardship of early US silver coins.
------

To answer Rick Beale’s request for an Overton listing with current rarity values, I suggest Stephen J. Herrman’s Auction & Mail Bid Prices Realized for Bust Half Dollars 1794-1839 which is published semiannually for about $25.  JRCS used to sell them but if no longer, inquiries should be made to Steve Herrman via email at Herrman102(at)aol.com

In reply to Sunday’s half dollar question:

First of all regarding Rick Beale’s question last week, “Is there an updated list of Overton number versus their rarities,” the Fifth Edition (2013), the technical answer to Rick’s question is no, as there is no current and publicly available updated list (to the best of my knowledge).

On the other hand, following are a number of sources I have used over the years to get more current rarity rating information for Pre-Turban and Capped Bust half dollars, both as a collector and Professional Numismatist.

The JRCS publication, the John Reich Journal (Journal) Volume 16 / Issue 3 (June 2005) published an article titled, “BHNC [Bust Half Nut Club] Rarity Ratings for Bust Half Dollars” by Stephen J. Herrman.  Steve wrote, “At the general meeting of the Bust Half Nut Club held during the 2004 ANA Convention in Pittsburgh, updated rarity rating estimates were presented for the Bust half dollar die marriages.  Included in the presentation was a summary of changes in the rarity ratings for both the Pre-Turban half dollars (1794-1807) and the Turban (Capped Bust) half dollars (1807-1836).”

Steve Herrman included a table listing the rarity rating estimates for all die marriages in the third edition of the Overton book (1990) versus the current BHNC estimates (2004).  He included a column in the table for “the year in which the BHNC last updated the rarity rating estimate.”  If this table today was updated and current it would likely be the list that Rick is looking for with his question last week.  For example using the 1807 date, O-104 was an R-3 in 1990; in the table it is updated to R-5- (2004).  Some rarity ratings went up, many stayed the same, and some went down.

JRCS also publishes Censuses periodically for each of the early silver series, from half dimes to the early silver dollars 1794-1803. The last Census for the Pre-Turban half dollars was published Volume 24 / Issue 2 (July 2014) and the last Census for the R-4 to R-8 Capped Bust Half dollars was published in Volume 24 / Issue 3 (November 2014).  The rarity ratings used in these two Census according to Steve Herrman, the author, were “based on the Bust Half Nut Club (BHNC) study published in Volume 16 / Issue 3” in June 2005.  Steve noted that the rarity ratings for five die marriages were “demoted (from the 2004 study) due to the appearance of additional specimens.”  This Census thus provides a partial updated list (missing any changes for R-1 through R-3+ die marriages).

Back issues of the John Reich Journal are available for sale through Bryce Brown.  Not all issues are currently available – please check with Bryce for what issues that he has in stock. Bryce can be reached by e-mail at numismatics@att.net .  Last time I checked, Volume 24 / Issue 3 was not in stock, possibly there is a lot of Capped Bust half dollar collector demand for this issue as it has the latest Capped Bust Half Census and rarity ratings!

The most current source for the early half dollar rarity ratings that is available to the general public is found in Steve Herrman’s Auction & Mail Bid Prices Realized for Bust Half Dollars 1794 – 1839.  This is available from Steve for $24 in PDF format, $32 in printed form, or $38 for both.  This publication is typically updated two times per year.  Per Steve’s cover pages, it includes the “Rarity 3+ to Rarity 8 Die Varieties, Overdates & other Popular Varieties, Proofs, Mint Errors & Patterns, Countermarks, Contemporary Counterfeits, and Condition Census Specimens for all Die Varieties [Die Marriages].  For example the 1807 O-104 is still listed as R-5-.  Information included for each die marriage listed is Year, Var#, Description, Grade, Price, Date, Auction Name, and Lot#, all listed high to low by grade.

You can buy a single issue from Steve, or subscribe.  For example, I subscribe and get a printed copy as well as a PDF version that I can use on my laptop and iPad when I’m traveling or at coin shows (vs. bringing the printed copy along wherever I go).  Steve can be reached at herrman102(at)aol.com

The Bust Half Nut Club is also a source of information on the Pre-Turban and Capped Bust half dollars.  Steve Herman wrote in his June 2005 article, “the Bust Half Nut Club was established in the late 1960s as a group dedicated to the study and sharing of information about Bust half dollars attributed by Overton die marriage.  The primary focus over the years has been on Capped Bust half dollars (1807-1836).  However, an increasing number of members are also keenly interested in the Pre-Turban half dollars (1794-1807).  To be considered as a candidate for BHNC membership , an individual must own a minimum of 100 different Bust die marriages by Overton attribution, should be genuinely interested in obtaining new die marriages for their set, and must be sponsored by a current member who has verified the attribution and grades on their application.”  I am not a member, but BHNC members have another good source of rarity ratings and information on the die varieties of the early half dollars.

It is important to note that not every collector, researcher, author, or dealer will agree 100% on the rarity ratings for any series.

I hope this helps answer your question.  I welcome any feedback on my reply to Rick’s question.  I can be reached by e-mail at wdperki(at)attglobal.net . Thanks.

I am a JRCS member as well as a member of the “younger generation of collectors” that Brad Karoleff mentioned last week in his post regarding the potential digitization of the John Reich Journal. I am in favor of allowing the Newman Numismatic Portal (NNP) to digitize our journal for three reasons:

Reason #1: It would uphold the purpose of the JRCS.

As we see every week at the top of the JR Newsletter, “The purpose of the JRCS is to encourage the study of numismatics, particularly United States gold and silver coins minted before the introduction of the Seated Liberty design, and to provide technical and educational information concerning such coins.”

Allowing the NNP to digitize our journal would uphold the purpose of the JRCS.

Having our journal digitized on the NNP would expand our ability to attract new collectors (and hopefully new members) beyond the walls of a coin convention. While the focus is on attracting new collectors who are more likely to explore a website than attend a coin show, I also think that our presence on the NNP could capture the attention of another important group.  Last month at the Baltimore Show, an experienced collector mentioned to me that he recently started collecting Bust halves because he had maxed out on what he could afford in his current areas of collecting.  This type of collector is likely already a user of the NNP, so if our journal is available to view on the NNP, we could capture their attention when they search for a new area of collecting.
Reason #3: It would allow us to access the JRJ at a coin show.

The JRCS website provides a current JRJ Index by Issue, Topic/Denomination, and Author.  (Thanks to the JRCS member who updates this useful tool!). By using this JRJ Index in conjunction with our digitized journal on the NNP, we would be able to access the JRJ at a coin show when we need to refer to a specific piece of information.

As someone just starting out in the world of numismatics, the NNP has been a valuable resource from both the collector and researcher perspective. Before you cast your vote, please take a few minutes to explore the Newman Numismatic Portal https://nnp.wustl.edu/ and see what it has to offer.  (To specifically view examples of digitized publications from other specialty clubs, click here https://nnp.wustl.edu/library/periodicals).


Regarding the question of whether or not to allow the Newman Numismatic Portal to digitize the JR Journal, I can offer that the Numismatists of Wisconsin (NOW) board also discussed this last year and concluded we absolutely should allow it. To have the entirety of issues (50+ years) available for research, exposed nationally, to anyone can only be good for the club, good for the hobby. The question: "will members quit the club because they can read the journal on line?" came up, and we moved to wait two years - as is proposed by JRCS - before sending in the most current issues. Another consideration was that in spite of that fingertip access (NNP) to our digital archives, the vast majority of our members prefer reading our hard copy magazine verses online reading, and it is believed that few, if any, would circumvent the nominal $10 membership fee just to read the magazine on the NNP. Nevertheless, we did implement the two year policy.

The most difficult aspect of getting it done was the gathering of the entire volume and shipping it to NNP. Luckily, we have one member who is kind enough to store all the cartons of our archives in his shop, and also we have had another member who took it upon himself to have every issue of NOW NEWS bound into hardcover volumes before he was deceased, and still another member who filled in the pieces that escaped binding. The process took approximately two months. NNP shipped them back to us and our NOW NEWS was online before we knew it. They made the process easy and free to the club. Now if anyone is interested in any Wisconsin numismatic item, or perhaps some of the early ambitions of Chet Krause, they may find some interesting information in NOW NEWS.


My opinion is that JRCS should allow digitization by the Newman Numismatic Portal.
Jeff Reichenberger