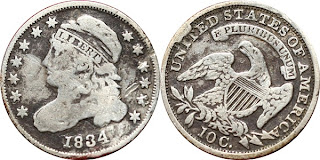 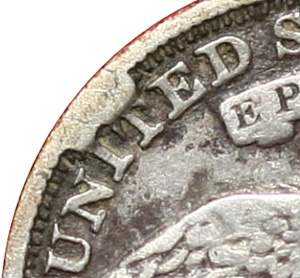 
From Jim Matthews:
Recent discussion among the JRCS members includes making available a number of copies of the 1984 Early United States Dimes 1796 - 1837 as there seems to be continuing demand for copies, yet few are available in the marketplace. The copyright of the books lies with the five authors or their estates. I believe this to be a great idea as long as the authors agree, and thankfully am not a lawyer to have to know all the nuances of the law related to these things.
On another thought that has been discussed, a second and revised edition of the dime book could be undertaken, one that includes expanded information on die states, remarriages of certain varieties and of course updated rarity ratings, along with the inclusion of the new 1803 JR-5 die variety. Without a doubt, a major revision like this would take considerable time to accomplish, despite the fact that the information, photographs and knowledge would be forthcoming from the many collectors!
------
Richard Meaney wrote:
I read Brad Karoleff's request for coins to study at the EAC "Happenings" and thought it would be neat for half dime collectors to offer a "type set of capped bust half dimes."  Most of us don't think too much about the different design types of half dimes, since we are too busy trying to find out if a certain coin has the desired characteristics for a specific die marriage we need or want.  Consider what a type set of capped bust half dimes might entail and how easy it would be to differentiate between the different types while showing a half dime novice the differences:
-Three Pale Gules
-Two Pale Gules
-Border Dentils
-Beaded Dentils
-Narrow Dentils
-Regular Date
-Small Date
-Regular 5C
-Small 5C
-Regular Arrows
-Modified Arrows of 1834 LM-2 and LM-3
I realize that there could be all sorts of additions to the eleven basic design types I have listed, but I wanted to keep the list manageable for whomever gets to show off the coins.  Anyway, I hope my suggestion generates some other discussion on the topic.  Now that I've written all that, I'm sure some of you are scratching your heads, wondering "what modified arrows of 1834" is he talking about?  I don't know if something has ever been written about it, but I sure see a different design type on the arrowheads of 1834 LM-2 and LM-3 half dimes!
Posted by Editor, JR Newsletter at 2:45 PM No comments: