While doing Red Book varieties of Bust halves I also look for key varieties using Edgar Souders' "The Top 100 R4 & R5". I like halves with die cracks and always wanted the Comet variety with single leaf. Well, I was lucky to win as the only bidder at just the minimum in the low $200s. 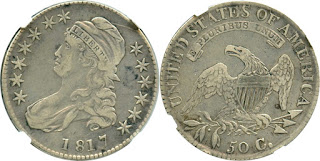 I also was contemplating getting a 1807 draped bust some day to go with the 1807 capped bust. I was looking at a few on eBay when I saw one with star 1 close to the curls;  thought it could be a  O-101 R5 rarity but it was really a  O-110. I never looked at varieties of Draped halves before so I started looking at a few more to attribute. I came across this one in NGC holder marked as cleaned. The reverse was posted as attached; upside down. The opening bid was about $50+ higher than what most cleaned 1807 draped halves go for on Heritage. I made a bit higher bid and won … an O-104 R5-. As I'll only buy one, at least I have a key variety. February turned out to be a great month for searching for early halves.

A couple of weeks ago, Vern Porter asked if anyone other than Louis Scuderi (who cherried an 1833 LM-5/V-10 capped bust half dime) has found anything worthwhile in the series.  Certainly, this is not even in the neighborhood of Louis Scuderi's find, but nonetheless something I am happy to have added to my collection.  I recently upgraded my 1834 LM-3/V-2  (an R-3 die marriage) from an AU58 CAC example to the pictured (PCGS Trueview photo is below) PCGS MS63.  Most collectors of capped bust half dimes, in my opinion, don't spend too much time or effort on the five 1834 die marriages, since all are relatively easy to find.  However, my experience is that the 1834 LM-3 has been quite difficult to find in mint state grades.  In fact, the most recent JRCS census of early half dimes (2015) shows only two 1834 LM-3 half dimes graded in the MS 60-62 range, with MS62 being the finest reported.  I'm not one to pursue "finest known" or "highest in the census" by any means, but was happy to add this mint state example to my collection.  It was also pretty nice to buy the coin for less than PCGS price guide.

I did some further research, wondering if I could find out when/where this coin last sold:

Authors of "Federal Half Dimes 1792-1837" Russell J. Logan and John W. McCloskey stated, "High grade examples of this die marriage are difficult to find.  An example described as Brilliant Uncirculated was auctioned by Stack's, 3/92:470."  With the hope that the coin referenced by the authors was plated, I wrote to numismatic book seller Bryce Brown and ordered a copy of "The William W. Moore Collection of United States Coins and Patterns" published by Stack's for their March 17-18, 1992 auction.  I found lot 470 described as "1834 V.2.  A 3 over an inverted 3.  Brilliant Uncirculated, light toning."  Unfortunately, the coin was not plated by Stack's, so my speculation will stay just that for now.  When I followed up with the seller, he advised, "I bought the coin from a client who bought it out of an auction. That's all I know."  I guess I will just have to categorize this one as a "maybe!" 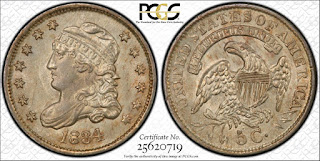 Bill has collected coins for over sixty years and specialized in Capped Bust Halves. At one time he had 425 of the then known 450 die marriages. Several dozen Capped Bust Halves of his are in the auction as well as early dollars, quarters, dimes, and half dimes.  The auction catalogue has a nice overview of Dr. Christie's collection and his numismatic journey (Pages 222-223), although it does misspell the name of numismatist Elton Dozier.
Good luck to Bill and happy hunting to the auction participants.
Mike McDaniel
JRCS Member #1467
Posted by Editor, JR Newsletter at 1:15 PM No comments: