There's a significant overlap between JRCS and EAC, Early American Coppers.  The EAC meeting will be Friday morning at 9:00 AM.  Come join us.  At the very least, you'll hear about the upcoming EAC/JRCS conventions, and you'll undoubtedly see a number of JRCS pals at the meeting
Denis Loring
National Secretary, EAC
------
Richard Meaney wrote:

I've had an XF example of the 1832 LM-1 die marriage as the set piece in my half dime collection for quite some time.  Just yesterday, I received an AU-53 example from JJ Teaparty.  I think this is an R-4 die marriage that lives up to the billing of "difficult to find in grades above XF."  I took the photos to create the image below.  You can click on the image to view a larger version. 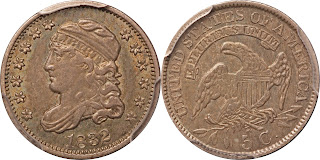 Posted by Editor, JR Newsletter at 8:51 AM No comments: