Editor:  The ANA show was a great one for me.  Lots of people to see, lots to do, and plenty of coins!  I'm still catching up from the show, travel, and a bit of work mixed in.  I hope we will receive some reports from ANA attendees.
------

I would like to announce to fellow JRCS members the publication release of my book Robert Scot - Engraving Liberty, which is the culmination of many years of archival research.

The biography of Robert Scot contains much information that has not been previously published or is not widely known, including Scot's engraving during the Revolutionary period for American officers, his work with Scottish immigrant publishers that enabled the expansion of illustrated scientific books within America, and his engraving of federal revenue stamps to support President John Adam's buildup of the American Navy during the Quasi-War with France. Images of actual surviving dies of eagle designs for federal revenue stamps are included, which are similar to coinage dies and were engraved at the US Mint. Also, new information of Scot's activities while at the Mint, along with Scot's wife and family are included.

The book is published by American History Press, with color illustrations and a complete listing of Scot's known engravings. The price is $24.95 plus shipping. A press release, purchase information, and endorsements by Len Augsburger, R.W. Julian, and Steve Tompkins is at http://americanhistorypress.com/index.php?main_page=product_info&cPath=1&products_id=37

I will also have some signed books at the same price parrnyberg(at)frontier.com 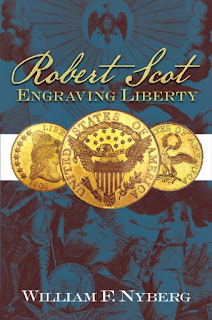 David Perkins wrote with a fun story from the ANA:

What are the odds?  A Story From the 2015 ANA Convention

This is a true story.

I had the coin in my inventory for between 6 and 9 months, and within 48 hours could have sold this 1797 Draped Bust Dollar five times!

I really enjoyed the 2015 ANA Convention in Chicago.  It was a great show this year.  The John Reich Collectors Society (JRCS) meeting was probably one of the two largest meetings in attendance ever.  Perhaps this was somewhat due to the announcement that Garrett Ziss sharing his research and making a presentation on Bust Coin images on paper money.  There had to be well over 60 members and guests in attendance.   This was a fascinating topic and Garrett did a great job.

Garrett ended his presentation to a standing ovation!

There will be a "six figure" Southwestern-consigned bust quarter collection sold through Heritage Auctions in September.  Look for quarters in PCGS and older, NGC "fatty holders" with dates ranging from 1796-1838.  Some coins are white, some coins are toned, and grades range from EF-AU to MS, including an Eliasberg-pedigreed 1832 B-1 quarter in a PCGS MS62 CAC holder

Posted by Editor, JR Newsletter at 12:06 AM No comments: