I’d like to let new collectors of early dimes know that I still have some spiral-bound photocopies I made of the dime book (Early United States Dimes). Since the book is no longer in print, and finding copies is often difficult, a photocopy may be the next best thing (we received permission from an authors to do this). Anybody who wants one should send me an email (dqmiami (at) yahoo.com) with your address and a commitment to donate $20 to the JRCS, and I’ll send out a copy postpaid.

A reminder to readers about the JRCS Half Dime census:

Half dime census information is now being solicited for inclusion in the July, pre-ANA issue of the John Reich Journal.  Please email your complete inventory listing (including all duplicates and die states) of all your 1792, Draped Bust, Flowing Hair and Capped Bust half dimes to:

Stephen Crain at:  mrhalfdime (at) aol.com

Please respond before May 30, 2013 to ensure inclusion of your collection in this census.

Speaking of half dimes, Louis Scuderi and Richard Meaney had some good correspondence about half dimes recently...and it is shared here:

Louis:  I'm trying to fill in some of the missing half dime die states in my set (and trying to find the "elusive 24" as I call the 24 still missing capped bust silver varieties that I need). Recently I purchased a late die state 1832 LM-8. I've provided images of what I believe is an 1832 LM-8.5. Could you please confirm the attribution. I have no real idea of the rarity but have been looking for one for a while- maybe I just missed them and this marriage is common. Can't really tell from the LM book what rarity it is and we don't call it out specifically in the census published in the JRJ. Best that I can tell is that the book says 8.2 and 8.3 are the rarest suggesting that 8.1, 8.4 and 8.5 are more common? Don't see many in the census. Comments appreciated.

Richard:  It is nice to be able to find a die marriage or remarriage or even die state that you need, isn't it?  As the collection (and in your case:  collections) advances, it becomes a rarer event.
Your coin is a pretty cool example of the 1832 LM-8.5.  I think I have two examples, one that is the earliest of early die states (barely shows crack over A3) and the other is likely a late state (but not as late as yours) with the IT base solidly joined.
I consider the 1832 LM-8.5 to be lumped together with the 8.1 and 8.4 as R3 insofar as rarity is concerned.  The 8.2 and 8.3 remain quite elusive.  I think part of the lack of examples in the census may be related to the tendency of collectors to not collect by die remarriage with significant attention to detail.  When I look at 1832 LM-8 half dimes, I generally see 8.4 as most common, then early die state 8.5, then 8.1 -- and the 8.2 and 8.3 are hardly ever seen.

Louis:  Thanks. I suspected that it probably wasn't all that rare. I think you are correct that few are collecting by die marriage and paying attention to somewhat awful-looking strikes like the 8.5. I thought that it was probably quite late and close to the 33 LM3.5. Is the 33 LM3.5 reverse known without the CUD? If so this 32 8.5 reverse EDS must look very similar.
At this point it is getting pretty frustrating (and expensive) to add new varieties to any of my sets. Die states for the half dimes are the biggest unfilled part of my collecting now so I've begun to pay more attention to die states (probably explains why it took so long to add the 32 LM8.5). Other than that I'm just upgrading.

Richard:  I don't know of any examples of the 1833 LM-3.5 without the cud…but that doesn't mean they aren't out there.

Louis:  Seems to be a half dime weekend for me. I got two in the mail with CUDs today. The first is a nice 1831 LM-1.3 which is fairly late but not unlike several I have already. The second is a fairly late die state of the 1830 LM-1.2. It is later than the two I have already. Was wondering if you know of one in a later die state. There is a really pronounced raised area on the lower portion of the CUD at the bottom of ME in AMERICA and the right upright of the M is split into two different levels. This appears later than the Reiver state e coin illustrated on the Heritage page.
I've provided images. It is in a PCGS Genuine XF details holder which makes it somewhat difficult to see all of the CUD. The CUD at the top of A2 in AMERICA is especially thick. Also all of the arrowheads as well as A3 have die cracks to the dentils with the top arrowhead crack strongest with a little tine like crack beginning to run towards A3.

Richard:  I have a lower grade 1830 LM-1.2 that appears later die state.  I thought I had an image of it, but in checking through the files on my computer, I found that either I don't have an image or I just can't find it!

A question for the readership based on my observations of some 1834 dimes. Since I started collecting bust coins by variety back in 1986 I found that I could often identify some dime varieties by color alone. When I first started collecting I noticed that many of the examples of the 1834 JR4 dime displayed a brownish-red color (see image below). This is especially visible on specimens that are in VF grade or lower. I've noticed similar colored coins in the other bust series in 1834 and surrounding years and have been told by some dealers that they have been chemically altered. Our editor Richard has noted that he was told that the chemical used was possibly arsenic. I would appreciate the readership checking their 1834 half dimes, dimes, quarters and half dollars and relaying any information on off color varieties and especially if you have seen more than 1 example of a specific variety off color. For example I note specifically in the half dollars that I often see higher grade O-108's described as "nice color" and when you check out the images they tend to display a reddish hue. Right now I am concentrating on varieties that were minted in the early-middle part of 1834 so by die emission order I'm specifically concentrating on 1834 JR 4 and JR5 in the dimes, all of the 1834 quarters (though I've seen 1833's and some 1835's look brownish-to-brownish red), and the 1834 O-108 as well as the O-104 through O-107 and a few other early-to-mid-1834 half dollar varieties.

Thanks in advance for any help the readership can provide for this project. 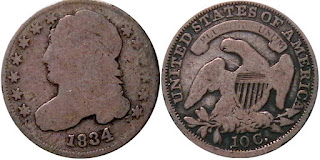 Posted by Editor, JR Newsletter at 10:20 AM No comments: