A final reminder for collectors of half dimes starts us off this week:

Please respond by May 15, 2015 to ensure inclusion of your collection in this census. This is a hard cut-off date – no exceptions, since the completed census must appear in the pre-ANA John Reich Journal.

Thank you,
Steve
------
John Okerson wrote that he is near completion of his set of JR Journals, but needs some help:
Trying to complete my collection of John Reich Journal issues – I need Volume 4 #3, Volume 5 #3 and Volume 17 #1.

The Workflow While David Ott Was Employed

David Ott was the Mint’s first Melter & Refiner Pro Tem.  He was never nominated by President Washington for the position of Melter & Refiner.  In addition, I have been unable to locate any document or reference indicating that he posted his surety bond.  It is logical to conclude this because no entries were ever made in the Waste Book or Bullion Journal during his tenure that identified him as an officer in a bullion transfer.  Instead, the entries identified that the bullion deposits that he melted and refined were done so while the bullion was in the custody of the Chief Coiner.

The Workflow After David Ott Resigned

Per page 23 of “Orders and directions for conducting the Mint of the United States, established by Elias Boudinot, director of said mint. November 2, 1795” the Melter & Refiner:

Is to receive all bullion after it is assayed, with a copy of the assayer’s report, from the Treasurer of the Mint, and cause the same without delay, to be melted and refined according to the standard of the United States, and cast into bars in the order in which it is delivered to him unless otherwise specifically directed.  As soon as this duty is executed he is to return the same to the Treasurer, to remain ready for coinage. 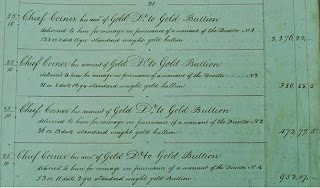 Does anyone know the etymology (origins) of the nickname 'Office-Boy' reverse for the 1820 JR-2 bust dime? Apparently Breen used it in his encyclopedia, but is there an earlier reference?

Do we know if there was, and who the so-called 'apprentice' was who likely made this die!? Are there any mint records of mint employees at this time which could potentially answer this question?

Thanks very much,
Winston
Posted by Editor, JR Newsletter at 1:11 PM No comments: