This week marked 25 years since the discovery of a new Capped Bust Half Dime die marriage, 1829 "V-17" (now more widely known as 1829 LM-8). The discovery coin surfaced on February 26, 1988 during the major coin show at Baltimore's Festival Hall, about four years before Festival Hall itself was razed to make way for the 1993 expansion of the Baltimore Convention Center. The large coin shows at Festival Hall prior to 1993 were the immediate forerunners of the current Whitman shows at the Baltimore Convention Center. About thirty minutes after the February 1988 show had opened to the public, I encountered Jules Reiver while moving among the aisles, and we stopped to chat for a while before going our separate ways. Within minutes after parting with Jules, I came upon the new die marriage 1829 "V-17" at the table of a PNG member dealer from the Midwest.

I would like to announce the discovery of a previously undocumented CLE half dollar to the collecting community.  I was fortunate enough to have purchased this one as part of a collection last week.  I hope you all enjoy the discovery as much as I did! 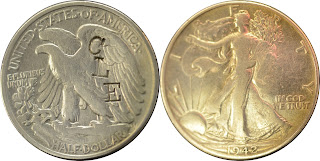 Posted by Editor, JR Newsletter at 8:50 AM No comments: