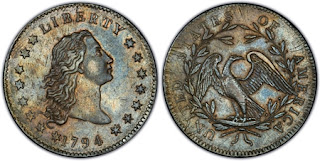 David advised, "the majority of this article was part of my JRCS presentation at the 2017 FUN Show.  A letter from Secretary of State Edmund Randolph to President Washington, dated October 16, 1794, has shed additional light on the release of the 1794 dollars and who received them."  The title of the article is The First 1794 Dollar Released From The Mint.


Fellow collectors who pursue "complete sets" by die marriage will appreciate this contribution from Louis Scuderi:

I guess that when it comes to finding rare half dimes I have to be up at 3 in the morning. That is the time of day I found my 1835 LM12 some years ago. Well, 3 AM was good for me again. I was up late working and decided to take one more look around eBay before I closed down for the night (actually morning!). An 1833 half dime with a small and very, very, very fuzzy image popped up just as I was about to sign off. At first I thought- "been looking at the computer screen too long"- but damn if it didn't look like it could be an 1833 LM5. I spent 20 minutes appraising the coin and give it better than 75/25 chance of being the 1833 LM5 - the last variety that I needed for my capped bust half dime set. A Buy It Now to boot!

Bought it and then the waiting began, -my apprehension growing with each day as I tracked its path across the country. I thought “hopefully the guy was not using some stock photo, and “was my brain so fuzzy and addled at 3AM that I screwed up the attribution?” Even with the fuzzy pictures in hand and studying them over and over again I still couldn’t tell. Eventually I got to the point of convincing myself that I had misattributed the variety. Oh well, just some intense nervous anticipation for a few days!
For once I was blessed with an early arrival of a package. Tore it open and there it was! Capped bust half dimes by variety complete! See image. This coin is apparently number seven known. A solid R7.

So after 17 years of chasing this elusive variety, a near miss at auction, and a few purchases of low grade poorly imaged 1833 LM10’s on eBay, this variety finally was accounted for. I guess persistence pays off.

One final note- Of course some of my fellow collectors will remember the last time in 2010 that I did this for my second "complete" set of capped bust dimes. Sure enough someone went and found that 1827 JR14 a few months later. This raises an interesting question. Will lightning strike again and does this mean that we will soon be hearing of a new half dime variety?

(editor's note:  you may click on this image provided by Louis to open a larger version) 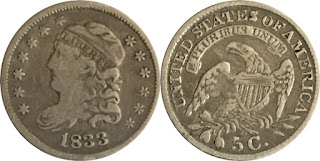 Gawain O'Connor sent this to us:

I found these passages in a general British book on coin collecting from 50 years ago. While not exactly flattering, it seems to aptly describe my collecting preferences - and perhaps the preferences of other members of JRCS.
--

As in most other series, the value of an American coin is arrived at mostly by its rarity; the condition is naturally important and so, too, is supply and demand. Sometimes one denomination is particularly popular and it is possible to obtain more than catalogue price for these specimens, whilst at a later date interest has turned to something else.

Apart from the perhaps astonishing values that are placed on some coins, the American series has little to recommend it to the numismatist. As with most other countries, the artistry in the nineteenth- and twentieth-century issues is generally poor. In the writer’s view, only the issues of the eighteenth and early nineteenth century, say to 1840, are worth collecting. Unfortunately, they are the most expensive!
…
Since the collector of American coins is considerably restricted in the number of coins he can collect, he is naturally concerned with slight variations in design. These variations, or die varieties as they are called, consist of such peculiarities as the addition of another stop in the legend, part of a letter being filled up on the die, a different expression on the face of Liberty, or the date being engraved over a preceding one, etc. Whilst this may be construed as more in keeping with pure numismatics than the ignoring of such varieties, and the collecting of coins simply for the sake of it, it has perhaps been carried too far in some instances.

Posted by Editor, JR Newsletter at 12:02 AM No comments: