Many people have either already left their homes and headed to Rosemont, IL for the ANA Summer Show or will soon be doing so, thus this week's edition of the JR Newsletter is early.  For those of you going to the show, I hope you have a wonderful time and are willing to share your experiences at the show by submitting a contribution or two to this newsletter (hint, hint).
------
Jim Matthews wrote:

By now everyone should have their Stack's-Bowers ANA catalogs. If not please call Adrianne at 800-458-4646. There are so many great coins in this auction it would be impossible to list them all.

One of coins I consigned is an extremely rare 1800 LM-2, V-3 half dime as lot 8204. This is the discovery coin from the New Netherlands #53 (June 1959, lot 438) where Walter Breen discovered and described it. For all the searching of the last 50+ years a total of 5 have been found thus far. The finest is AU-58 and held in an advanced collection. I actually have a second example that's a very late die state and decided to keep that coin and let this piece go. PCGS grades it as F-12, and the other three known examples have varying degrees of problems or damage and probably won't be certified unless they are in net grade or genuine holders.

Another favorite of mine was the 1836 O-106 half dollar in Proof, which I wrote about here previously. I actually haven't seen that coin since it came back in the edge view holder from NGC, so am looking forward to the ANA to see it once again.

There are all sorts of high grade to modest grade rarities, and I can't recall a time when so many collector coins have appeared in a single ANA auction. Needless to say, there is something for everyone and every budget.

If anyone has any questions about a specific lot, feel free to contact me and we'll do our best to assist.

Meanwhile I'm looking forward to seeing the latest John Reich Journal articles and to catch up with the latest half dime census!

We received a few contributions in response to Harry Cabluck's comments concerning his 1827 half dollar (JR Newsletter #48):

"In response to Harry Cabluck request for info on his Bust Half Dollar.  A very nice looking coin!  I would agree with O-120a attribution, a late die state with die cracks showing on the reverse across the United States of America, R3.  I don't know if there is a on-line attribution site guide?  There is a online site "Coinzip.com" that has many pictures of bust type collector coins already typed.  Also listed are various Bust Half dollars by Overton variety numbers.  When I attribute all Bust Halves I use the Third Edition of the "Ultimate Guide To Attributing Bust Half Dollars" by Glen R. Peterson, MD which has nice big pictures of the key pick up points of the various halves along with the 2005 Fourth Edition of the Overton Book.  The JRCS article on attributing 1827 Half Dollars is good, however I just keep it as a reference copy in my Peterson Book in case I get stuck on the 1827's."  --  Ralph Munoz

David Quint has an important announcement for dime collectors:

JRCS Bust Dime Census
Anyone who would like their Draped and/or Capped Bust Dimes included in the upcoming JRCS census, please send a list of the die marriage and grades of your coins to David Quint at:

The census will be published in the next issue of the John Reich Journal.
------
Editor's Note:  I received an email from Sheridan Downey about the mail bid auction of the late Roger Solomon collection.  Roger had some really high quality coins.  In fact, I am kind of glad I don't collect early dimes, otherwise I would have to go after the beautiful 1822 dime in the auction (grade PCGS AU=55, ex-Benson!).   If you want to learn more about the auction (closing date is August 17th!), check out Sheridan's website:  http://www.sheridanscoins.com/
Posted by Editor, JR Newsletter at 7:04 AM No comments:

I'm sure Sunday just wasn't the same without your weekly newsletter fix, but I assure you Sunday was odd for your editor too.  Sometime during the night between Saturday and Sunday morning, a cable fell from the utility pole and took my internet with it!  Fortunately, service has been restored.

Just one contribution for the week, from Harry Cabluck:

I am attempting to attribute this 1827 Bust Half Dollar.

Likely an 0 120, but the pictures in the (revised) 1970 Overton here are too small for positive identification.

Is there an online site where Overtons might be attributed?

Please advise how one might join JRCS and how to receive a copy of the article above. 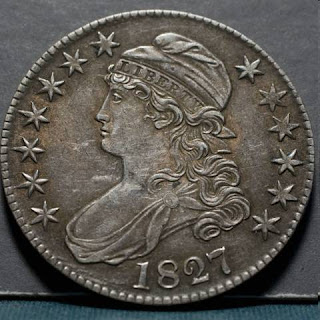 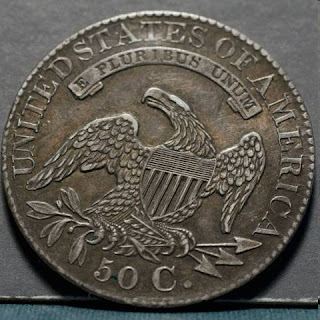 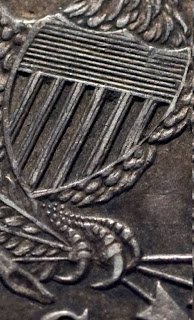 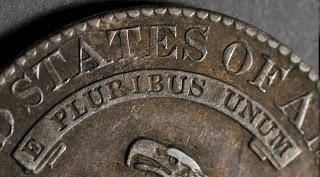 Posted by Editor, JR Newsletter at 2:35 PM No comments: