This newsletter is a bit late, but somebody has to catch those fish in Alaska, and it might as well be me!  I was out for the last few days fishing on the Kenai Peninsula with my brother.  Halibut, trout, and salmon were the targets for his visit and we succeeded.  Enough of that, on to the coins!

I was helping a friend at the Blue Ridge Numismatic Association annual show this past weekend in Dalton, GA when he mentioned a counterfeit 1816 CBHD that he purchased several years ago at a show in Dalton. We talked about it for awhile and I asked if he kept the pictures that he took of the coin. After searching his pics he emailed them to me. Barry Ciociola mentioned that this is only the second counterfeit 1816 that he has seen in all of his years as a dealer.
Later at the same show he sold it to another dealer. I have attached the pics that he sent to me (see images below). They were taken with a cell phone camera, so, the quality is not very good.
Jerry Zonca
BHNC# 150


Last week I wrote about a 1799 Dollar “Counterstamped with the head of Benjamin Franklin” that was listed on a 1943 invoice from B. G. Johnson to F.C.C. Boyd  that I had come across on the Newman Numismatic Portal.  I’m happy to report that three people wrote me, all with related responses.  It appears that a Civil War Token Die was used to strike this “portrait of Ben Franklin”  onto the obverse of a 1799 Dollar.  I wrote,
The last item on the invoice was a 1799 Silver Dollar, “Counterstamped with head of Benjamin Franklin.”  It was called Very fine, and sold for $40.00.  If anyone knows anything about this important counterstamped Dollar, please contact me at wdperki(at)attglobal.net .  I have never seen or heard of this, despite a  strong interest in counterstamped Early Dollars 1794-1803.
From John Okerson:
I found it in The Medals of Franklin by Phil W. Greenslet edited by David E. Schenkman of 1993 by Token and Medal Society, Inc. page 212 as item GT-705.  The description says “(same as GT-701; struck on U.S. 1799 silver dollar) (blank except for coin design) silver 39 mm, R-10 (Fuld Civil War token 153/B1)”.
I looked at Fuld’s Photographic Plates for Patriotic Civil War Tokens, Volume 1 and found what appears to be the counterstamp token on Plate VI as number 153.  This is a recent addition to NNP, so you should be able to download it there quite easily.
From Roger Lalich:
This is a civil war token die.
See Civil War Token Society Journal vol. 6, no. 2, page 46 (available on Newman Portal).
From David Gladfelter:
David, this coin (or token) is listed in the current  (fifth) edition of the Fuld patriotic Civil War token catalog as die combination 153/0, overstruck on a silver planchet (code fo), rarity R10 (unique), with comment "over 1799 U.S. dollar". In the current (second) edition of the "Official Red Book Guide Book of Civil War Tokens," page 130, Q. David Bowers notes that die 153, which is only 18mm in diameter, has been used to make "numismatic strikes", still exists, and "has been used to make modern strikings." Most notably, ANA president J. Henri Ripstra used it to strike a personal token in aluminum or white metal that was distributed at the 1939 ANA convention in New York City. Because of the small size of this die, it would be more correct to call the 153/0 a counterstamp than an overstrike.
I thank everyone for their interest and assistance!  Thanks.
W. David Perkins
Centennial, CO 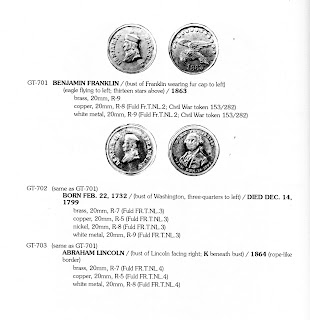 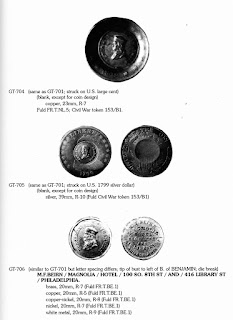 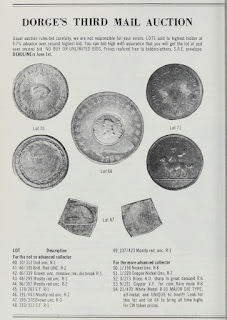 Posted by Editor, JR Newsletter at 12:23 AM No comments: