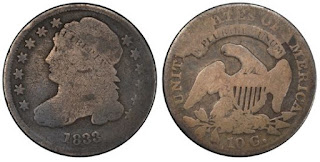 In looking through the catalog, a 1798 silver dollar caught my eye.  Photo, credit Stack's Bowers, is below.

I’m usually looking for attractive and problem free examples of early dollars.  This particular coin was Graded “AU Details – Environmental Damage (PCGS)” and is not attractive at all.  The cataloger noted, “Wispy hairlines point to a cleaning, but more significant is scattered surface scale along the right obverse and reverse borders, as well as over Liberty’s portrait, which feature explains the PCGS qualifier.”  The cataloger also wrote, “Predominantly brilliant with plenty of bright satiny luster in evidence, the coin also retains sharp to full strikiing detail in virtually all areas of the design.”

What really caught my eye was the footnote which reads, “Recently discovered in 2017 in a rural dig in Haiti along with a group of Spanish 8 reales.”  This lustrous early dollar likely traveled from America to Haiti by ship sometime in the 1800s.  And then lay hidden in the ground for the next 150-200 years!

We can only wonder what stories this coin could tell…. 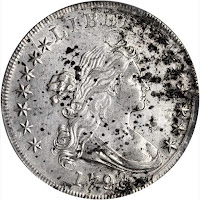 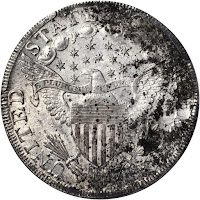 Posted by Editor, JR Newsletter at 11:57 AM No comments: