Attached are images of an item that sold on eBay on June 28, 2011.  It realized $710 Canadian dollars with four bidders and twelve bids.
The image quality is poor, but it is an obvious copy to me. There was a question and answer posted before bidding closed.
Q:  The 1792 half disme, is it a restrike?
A:  I don't know sorry thank you for interest.
The seller has a Canadian address. I suppose this makes him less liable for prosecution under the "Hobby Protection Act" or laws against passing counterfeit U. S. coins. Other lots on his sales were mosly low value coins. There were other low quality images of U. S. coins offered including a couple of other half dimes.
Pete Smith 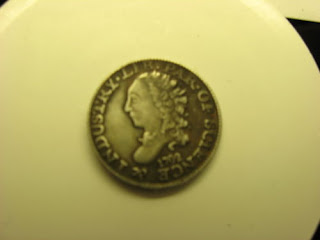 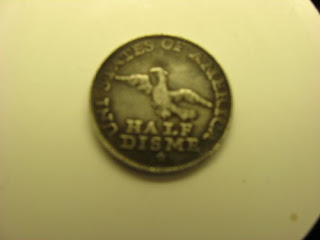 Although the ANA's 2011 Anniversary convention is still six weeks
away, completed exhibit applications must be received at ANA
headquarters by July 20; if you were working on an exhibit,
please do not miss this deadline.  Send any questions to
the local exhibits committee at
ANA2011Exhibits@ChicagoCoinClub.org

http://www.money.org/Content/NavigationMenu/NumismaticEvents/ConventionExhibits/default.htm
and the http://www.worldsfairofmoney.com/index.php?id=255 page
has links to everything for exhibitors: rules, application,
and more.

Collector exhibits will not be the only attraction during
August 16-20, Tuesday through Saturday.  The ANA web site has
a schedule of events, including club meetings, featured speakers,
and other activities.  A link to the schedule is at
http://www.worldsfairofmoney.com/index.php?id=52
Posted by Editor, JR Newsletter at 7:55 AM No comments: