Here is a brief report post-ANA from my perspective ...in no particular order.

- JRCS meeting highlights for me were the announcements of Steve Crain as JRCS Hall of Fame inductee, Jim Ross as the awardee of the Jules Reiver Literary Award, and presentation by Louis Scuderi on the medallic and coin engraving work of John Reich.

- I worked with David Perkins at his table for general assistance and specific help in facilitating the sale of the Stephen A. Crain collection capped bust half dimes.

- The Crain capped bust half dimes were very well received.  I believe 59 of the 64 coins that were offered via the fixed price list were sold by the end of the show.  Sixteen of the twenty sealed bid sale coins were from the Crain collection and all of them found new homes.  Further, as a "reward" for those who trekked to Rosemont, IL and found David's table, a number of raw capped bust half dimes from Steve Crain's collection were available for viewing and purchase.  I am certain that when Perkins completes his accounting for the show, he will find that well over 100 Crain half dimes were sold!

- Collectors seeking the types of coins offered by Perkins and his table-mate Jim Matthews were out in force Tuesday through Friday of the show.  I noticed steady to heavy traffic (odd term for people looking at coins at the table ...traffic!) each day until 3:00 or 4:00 PM.  I enjoyed the lull in the pace after 4:00.

- I enjoyed talking with Winston Zack about the first volume of his new book, "Bad Metal:  Circulating Contemporary Counterfeit United States Coins."  Winston is very excited about sharing the research he has done on contemporary counterfeits.  The book is due out later this year ...I went ahead an ordered a copy already (badmetalcoin.com).  By the way, Winston did not know that I was going to write about this in my report from the show!

- Best part of this show, and every one I have ever been to, was the time spent visiting and talking with other collectors and coin dealers.  Although I don't get to see most of my "coin friends" but once per year, it is always easy to renew the friendships, talks, and camaraderie at a show.  Nearly every person is in a good mood because they are at a show rather than their usual work place!  With the loss of Steve on my mind, I was appreciative of the time spent with friends at the show.  We never know when we will see one another again, do we?
--

Wearing my JR Newsletter editor's hat:  I discussed the timing of the publication of the JR Newsletter with fellow collectors at the ANA show.  They felt it would be better if it were published later in the day on Sundays.  One of the reasons for that was to give readers more time to write up a contribution to the JR Newsletter based on their "coin experiences" of the weekend.  So that is what we will do, publish later on Sundays. 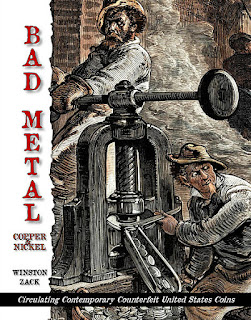 Posted by Editor, JR Newsletter at 8:03 PM No comments: