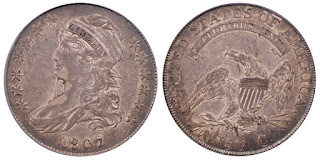 David Perkins provided this week's contribution.  Each of the three coin images in this week's JR Newsletter come from Perkins too!

What makes our hobby enjoyable for you?  Is it “the people or the coins?”  Or both?

In my 35 years of seriously collecting and researching coins, tokens, and Numismatic Literature, I’ve met a large number of interesting people, people that I might not have met if it wasn’t for my involvement in the hobby.  Most of these people I have seen from one to five times a year at major coin shows over the years.  I have kept in touch and corresponded with many of these “coin friends” in between shows.
This week two collectors and JRCS members alerted me to an 1833 CB Half Dollar with PERKINS counterstamped on Liberty that was for sale on e-bay.  I won this coin today.  Thank you Jim and Richard! 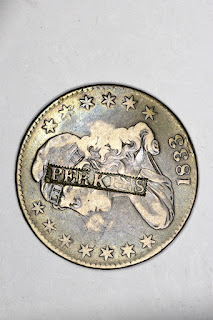 Unless you live in certain areas of the country there is a very low probability that you will meet someone locally with similar collecting interests.  I’ve had a little success with this in the Denver metro area over the years.  Following are three examples.

For over a decade I’ve gotten together a handful of times a year with a local collector and friend to talk coins and numismatics, and share a few new purchases.  We met through JRCS.  As I collect early dollars and he collects Capped Bust Half Dollars by die marriage he usually has more coins for show and tell than I do.  But the conversation is always good, and I always learn something at our lunches.  He now takes the coin photos for my website so I see him more often, and now it’s my new purchases vs. his new purchases, and now most the time I have a few more coins than he to share!

A couple of years ago I began also getting together with another JRCS member and collector who has collected Capped Bust Quarters for 20 years or more, despite him being quite a bit younger than I am.  We met when we met at my bank and he purchased an early quarter from me.  We got together this week and had a nice two-hour lunch, with me providing a few show and tell coins for him to view, which made us even as last time we got together he had coins with him and I didn’t.   He especially enjoyed viewing a choice Pine Tree Sixpence I had with me.

And today, a California Collector friend and Numismatist was in the Denver area and I had previously invited him to come over to my house and see my library, and to show him some coins that he wanted to view “in person” from my collection and as well as some coins for sale on my website.  He also wanted to compare his want list for CB Dimes and Half Dimes to the preliminary consignment listing for my ANA H10C and 10C sale coming up in August.   We had a nice two hour visit that felt like it went by in half an hour.  I was impressed as he has read all or most of the JRCS back issues on the Newman Portal, and has built a Numismatic library.   [If you want to be added to my distribution list for early and CB H10C and 10C please send me an e-mail at wdperki(at)attglobal.net ]

I’ve been a JRCS member since 1986, and I am a long time member of many other Numismatic clubs and organizations for 25 to 30 years.  Looking back, I’ve met a lot of interesting people through our great hobby.  And have seen a lot of great coins too! 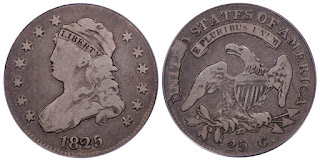 Posted by Editor, JR Newsletter at 6:13 PM No comments: