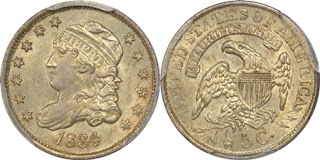 A contribution from David Finkelstein leads this week's JR Newsletter:

1.  Newly discovered information regarding the coining operations and workflow of the first United States Mint.

2. New (?) information on the delivery and distribution of the 1794 Dollars.

While many Bust Half Nut Club members, Numismatists, and early half dollar collectors may be aware of this June 1974 Mail Auction Sale, I was not.  I was excited when I came across this sale while having fun searching the Newman Portal over the holidays.  For those who did or didn’t know about this sale and don’t own a copy you can find a scan of the catalog in the Newman Portal archives at https://www.archive.org/stream/alcovertonrefere1974lest#page/n0/mode/2up

The cover page for the sale states that it is the “Mail Auction Sale” of THE AL C. OVERTON REFERENCE COLLECTION OF BUST HALF DOLLAR VARIETIES.  The closing date for the sale was Saturday, June 15, 1974.  This sale took place after the first two editions of the Overton book had been published.  The introduction by Lester Merkin on page 3 of the catalog reads,

The collection of bust half dollars being offered here was acquired over many years by Al Overton in order to aid in his compilations of the recognized references “Early Half Dollar Die Varieties”, first edition (1967) and the revised edition (1970).  In order to complete the references, Al estimated that over ten thousand lettered edge half dollars were closely examined, checked and compared.

Many collectors enjoy owning plate coins from the leading references for a particular series, myself included.  As a Professional Numismatist, plate coins have always done exceptionally well in my Fixed Price and Sealed Bid Sales.  Plate coins typically sell at a premium over coins that are the same die marriage and grade.  As a collector of the early dollars 1794 to 1803 by die marriage, I own or have owned plate coins from the Bolender reference (1950), the first edition of the Bowers silver dollar book (1993), and the second edition of the Bowers book (2013).

I’ve provided a photo of the Bolender Plate Coin for the obverse of the 1798 B-16, BB-110 silver dollar die marriage.  This coin grades PCGS AU55 and is the second finest example of this die marriage known to me, with one Mint State coin known, grading PCGS MS62 CAC.  This coin was part of the Warren Miller Collection, and was first identified by James Matthews as the Bolender Plate Coin while five early dollar collectors were playing “Early Dollar Whist” on June 10, 2006 “somewhere out East.”  [For more on this event please see the article “Old Dollar Whist” by Bill Luebke in the John Reich Journal Volume 17 / Issue 2, August 2006, pages 35-38.]  This was a fun day for all, and Bill did a great job writing about our Whist game in his article.]
Plate Coins in the June 1974 Overton Reference Collection sale were also highlighted in bold, and as such they stand out clearly in the catalog.  They were labeled PCE1 (Plate Coin Edition One.) and PCE2 (Plate Coin Edition Two.).

I invite stories comments on this sale and article.  Is there anyone that was around 42 years ago and remembers this sale?  Or has a souvenir or story from it?

[Despite the sale title and Lester Merkin’s introduction, I don’t believe this was Overton’s primary half dollar collection as the main collection was eventually sold by Sheridan Downey.]  Comments on this subject are also welcome. 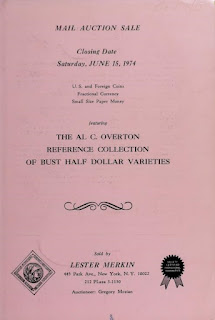 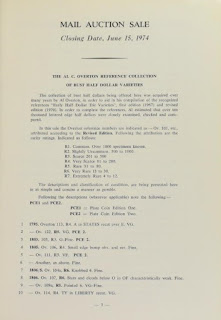 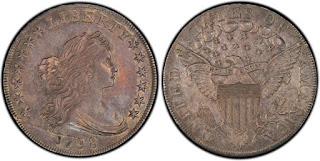 Here is an additional note from David Perkins concerning the FUN Show:

For those attending the FUN Convention in Ft. Lauderdale next week, W. David Perkins and Gerry Fortin will have Tables 1825 and 1827 at the show.  We will have a large selection of better Bust and Seated coinage.  Please stop by and see us.

Here are the links to our websites for a preview of what we will have at the show:

See you in Ft. Lauderdale!  Thanks.

Posted by Editor, JR Newsletter at 12:09 AM No comments: