David Davis .... Another Memory
Our deceased friend, David Davis, was a true collector with interests ranging from early coinage, numismatic literature, maps, and early postcards.    His collection of over 600 postcards depicting Michigan railroad depots was sold at auction this past week.    While early postcards is not necesarily the pervue of the JR Journal, I did think our fellow members would appreciate the video link attached of David talking about his collecting interest from 2010.   As experienced in my many conversations and correspondences with David, he is clear, articulate, and offers insight into one of his many collecting areas.   Enjoy the video produced by his family.
Michael Sullivan
http://www.youtube.com/watch?v=wkkOLeOs6eE

Any opinions would be welcome.

Tom Little
Editor's Note:  Photos are below.  Unfortunately, I received only obverse photos for the 1818 quarter.  Click on photos to view a larger size image. 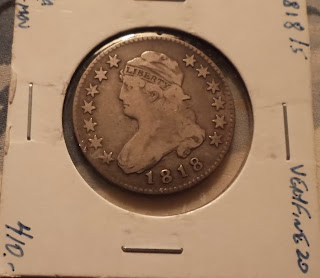 Posted by Editor, JR Newsletter at 9:38 AM No comments: