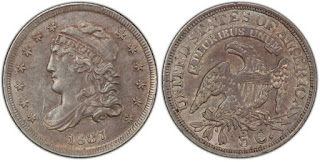 We are fortunate to have the family of Jim Matthews grace us with some words, video, and music this week.

The recent weeks have seen considerable numismatic activity in my world. I'm still catching up from Baltimore show of last weekend and the club show at LaVale, Maryland which happened to fall on the same weekend as the Whitman Baltimore show, but on Saturday and Sunday. I attended both by being in Baltimore from Wednesday through late Friday, then heading home late that night and off to set up early Saturday in LaVale, Maryland. Highlights of the shows for me were talking with many friends and keeping up as best I could with sales and purchases.

I want to note that Veteran's Day fell this year on Saturday, November 11, this being the 99th year since the famous Armistice Day which brought to an end the horrors of World War I on November 11 in 1918. While this massive conflict is known for being the first World War, involving countless nations and soldiers from many lands, the cessation of fighting was at last at hand in that November so long ago. World War I was so horrific in its nature and scope, that many truly believed it would be the "War to end all Wars" and the importance of the Armistice between the warring nations of that period soon became a National Holiday in America. A generation later, a new war broke out followed by others in seemingly rapid succession and the National Holiday known as "Armistice Day" was officially changed to "Veteran's Day" in honor of all those who have served in the various wars that have continued to this day. I have noticed a considerable number of coin dealers and collectors that I meet have military backgrounds in their careers. This is certainly a time that all citizens need to stop and say "thank you" the many who have served our nation fighting in wars that are often far away and in exceptionally difficult conditions. Numismatics would not be the hobby it is today without the massive support of our many veterans who return home and honor our nation by studying and collecting its coins!

On a side and numismatic note, in the fervor of the outbreak of long sought peace in our time in late 1918, the United States of America sought to commemorate the restoration of Peace in our land. So, in 1921, a new silver dollar was proposed, with design competition being awarded to Anthony de Francisci (a famous medalist) as a commemorative to the welcome the elusive peace that had finally arrived. Matching the difficulties of the Augustus Saint-Gaudens design of the High Relief $20 coin of 1907, de Francisci designed a High Relief silver dollar for 1921, of which just over 1 million were struck. The coining equipment and seasoned Mint staff balked at this challenging coin to strike up, and demanded a lower relief which could more easily be struck by the coining equipment. Thus in 1922 a lower relief was adopted and while lacking the robust features of the 1921 High Relief silver dollars, the elegance of de Francisci's concept continued in coinage. I just received a broad selection of Peace Silver Dollars in high grades, many of which offer CAC approval. While struck nearly a century after the coinage of John Reich, these coins offer similar challenges of finding clean surfaces, great eye appeal and high quality. I will have a dozen or more of these condition and key date rarities available at the FUN show in January sharing a table with Gerry Fortin and David Perkins. If you have ever considered collecting this series, or just want to learn about the amazing quality required for an MS64+ grade or MS66 then be sure to stop by and view these amazing coins.

A special note of appreciation for our vets and military folks out there:
On Veteran’s Day last weekend, at a coin show hosted by Jim Weir in the old firehall in La Vale, Maryland, I was impressed by how many of the people attending were wearing military caps, jackets, or patches representing every branch of the U.S. armed services. I enjoyed talking with these veterans (or families of veterans), many of whom served back in the day when soldiers were conscripted and nevertheless served our country with pride under very dangerous conditions.  It always strikes me that Armistice Day and Thanksgiving Day fall close together on the calendar, and while most of us much prefer peace over conflict, it is important to honor the people who have served in combat to keep our home shores safe and also to bring safety to other regions around the world.
For all of you active duty military folks and vets out there, I wish you a very Happy Thanksgiving.  May you share the day with your family and loved ones, safe and sound, or return home safely to family and loved ones from wherever you are stationed now.
The field of numismatics owes a lot to our armed forces because not only does the military represent a very large part of the coin collecting community, but these are people who fight to preserve our constitutional democracy and to uphold the values of our national republic so that the rest of us can continue to do what we do every day, whether caring for children at home, working in an office cubicle, protesting in the streets, or operating heavy machinery. None of us would have the freedom to do those things without a strong defense.

Thank you for your service doesn’t go far enough in acknowledging the training, the discipline, and the sacrifice that is required of our military personnel. But thank you nevertheless, for your years of service and for your commitment to our shared community values.
As a person who has worked in immigrant education for a long time, mostly with newcomers who come to my class to learn English and study for their citizenship exams, I can tell you that the United States of America represents the gold standard for freedom and the protection of personal liberties around the world.  That is why so many people to strive to get here and why they are so, so proud to gain U.S. citizenship, which is not an easy process.
Last week, I purchased a huge cake with a U.S. flag on it to share with my students and it was such a hit (with other classes joining us) that I had to purchase a second cake with another U.S. flag on it it to share with another group of students the following day. I then ordered another cake for the upcoming week because one of my students was so upset about missing our group photo that she spent the rest of the morning in tears. This really matters to me.  Even though it was only an ad hoc cell phone pic, my new arrival felt crushed to be excluded from it because she wants to share a proud U.S. flag / cake / English class photo with her family back in China. This newcomer's class represents five continents, 8 languages, and maybe 14 countries.  But? We all live right here, together, in the U.S. of A., and we are all grateful to be here. We are all willing to do our share of work om behalf of this society, and we certainly support the armed forces who keep this nation safe.

America is an inclusive society, and I deeply appreciate that.  It is one of the things that sets the U.S. apart as a nation and why we are such a standard-bearer for the world. As a public school educator, I work hard every day to support and defend the U.S. Constitution and I am proud of all of you who are out there in the field, doing this work on the battlefield. May God keep you safe, and Happy Thanksgiving. You have earned it.
My hat is off to all of our armed service personnel out there.  I salute you, as it were.  And, if you like, you can listen to the attached trumpet renditions of “Taps” and “America the Beautiful,” played by our daughter when she was 11 years old.  We spend a lot of time these days attending marching band events, and our child has a much wider repertoire now, but these early renditions still sound beautiful to my ear.

Respectfully, and with gratitude, Gabriela. 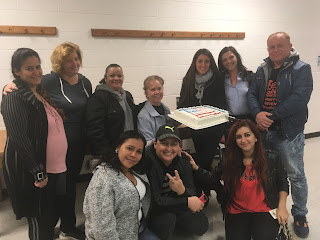 A picture of Gabriela's English as a Second Language class, people from all over the world!
--
Finally, here are links to Jim’s and Gabriela’s daughter, Melissa, playing “America The Beautiful” and then “Taps” on her trumpet.

Posted by Editor, JR Newsletter at 12:58 PM No comments: