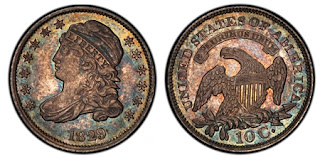 We have two contributions this week.  First, from David Quint:


Regarding Jim Carr's article in the July 2016 JR Journal (A New Draped Bust Half Dime Variety), I must say that at first I was quite skeptical, especially considering the condition of the coin. But after studying the pics for a good long while I'm pretty convinced he did find a new die marriage (1800 LM-5?). There's practically zero design element remaining on the obverse, but he's right, the final 3 stars look to be from the Libekty obverse (and don't look like any other variety) and the reverse is clearly Reverse C. It's pretty amazing when somebody identifies a new variety with such a damaged and worn coin, so kudos to Jim. I'm curious as to whether anybody disagrees with this attribution.


David Quint
------
Second, a report from the owner of the Easton Collection on his trip to the Summer ANA in Anaheim:

While I heard a lot of negative comments about the location, I made the trip from Connecticut to ANA. I must admit that a $100 cab fare from LAX to the show was a bit excessive. I try to attend the ANA because of the surprises it offers to me as well as seeing my coin friends that I otherwise wouldn’t get to see.

Arrived Wednesday night and stayed at the Hilton Hotel just a few steps from the convention center. Wednesday night met several dealer friends at the hotel bar and talked coins and life for a couple of hours.

List of my experiences –
1-      I enjoy attending the show for the possibility of finding THE coin – one dealer showed me a 1825 JR1 in PCGS 65+. It was a real WOW coin that I immediately fell in love with. The coin was beautifully toned and 100% original. In February, I missed out on the Pogue 1825 dime and was disappointed missing out on that one, so I was extremely thrilled to have this coin offered to me. I gave the coin to Todd so he can take one of his great photos. I attend ANA to have this type of coin offered to me – mission accomplished for the show.
2-      Friday, I received a PCGS award for my registry set of Capped Bust Dimes at the PCGS luncheon.  Great seeing some friends at the luncheon – Thank you PCGS!
3-      A couple of years ago, I started an 1862 mint set cabinet and I was excited to add an 1862S $5 Liberty Half Eagle. The coin is one of the finest known and its totally original and nicely toned.
4-      I participated in the David Perkins auction of the Kirk Gorman Capped Bust Dimes – this is the last part of the auction and I really wanted the  1824/2 JR-2. On Saturday, Dave Perkins informed me that I was the highest bidder. I was waiting for that JR2 for over 4 years. David did a great job bringing those coins to auction and I thanked him for his lead on Kirk’s coins.
5-      I gave PCGS a few coins to grade and they crossed all my coins including my Newman 1822 25/50 quarter. Never tried crossing that coin so it felt like a win when it crossed even thought I thought that all the coins should cross.
6-      Attended the NLG Bash on Thursday night and it was great seeing all the folks receiving awards for their contributions to the advancement of coins.
7-      One of my NY friends showed me the most recent Coinage magazine that was offered free at the show and there was an article about the May Pogue auction. WOW!  The article included my name with my commentary. Others that were cited in the article are David Bowers and Scott Travers – Pretty cool company for me being included.
8-      The number of collectors attending the show was lighter than I expected and that was too bad as they missed out on all the lectures, auctions coin deals and coin talk at the hotel bar. Even with the light attendance, I finally met a Bust Dime collector that I have been communicating with over the last several years but had never met.
9-      Attended Rick Snow's talk on his new idea on how coins should be graded. He was very interesting and good to hear. If you didn’t listen to his talk, then you should definitely listen to him.
10-   Sorry, I could attend the JRCS meeting on Wednesday morning.
11-   Flight home was uneventful and good to be home and back to work.

Posted by Editor, JR Newsletter at 1:12 PM No comments: