Usually, December is a slow month for coins, but this issue of the JR Newsletter tells me it is a great month for news about coins.  Lots of good stuff in here, starting with something from Rich Uhrich.

Rich Uhrich has announced he is selling for a client an 1838-O half dollar, one of only nine such coins known.  The coin is PCGS Specimen-50 and will be pictured on his website and will be at his table #712 at the FUN show.  A photo is provided for readers of the JR Newsletter.  In hand, the coin is more lustrous than one would conclude from the images.

Rich is also preparing his "Coin Year In Review" newsletter, an annual tradition.  Last year's edition was republished, in part, in Coin World.  The only way to get the newsletter on its issuance date of December 31, 2014, is to sign up on Rich's Newsletter page on his website www.richuhrichcoins.com .  At some time in January, 2015, the newsletter will be published on Rich's website. 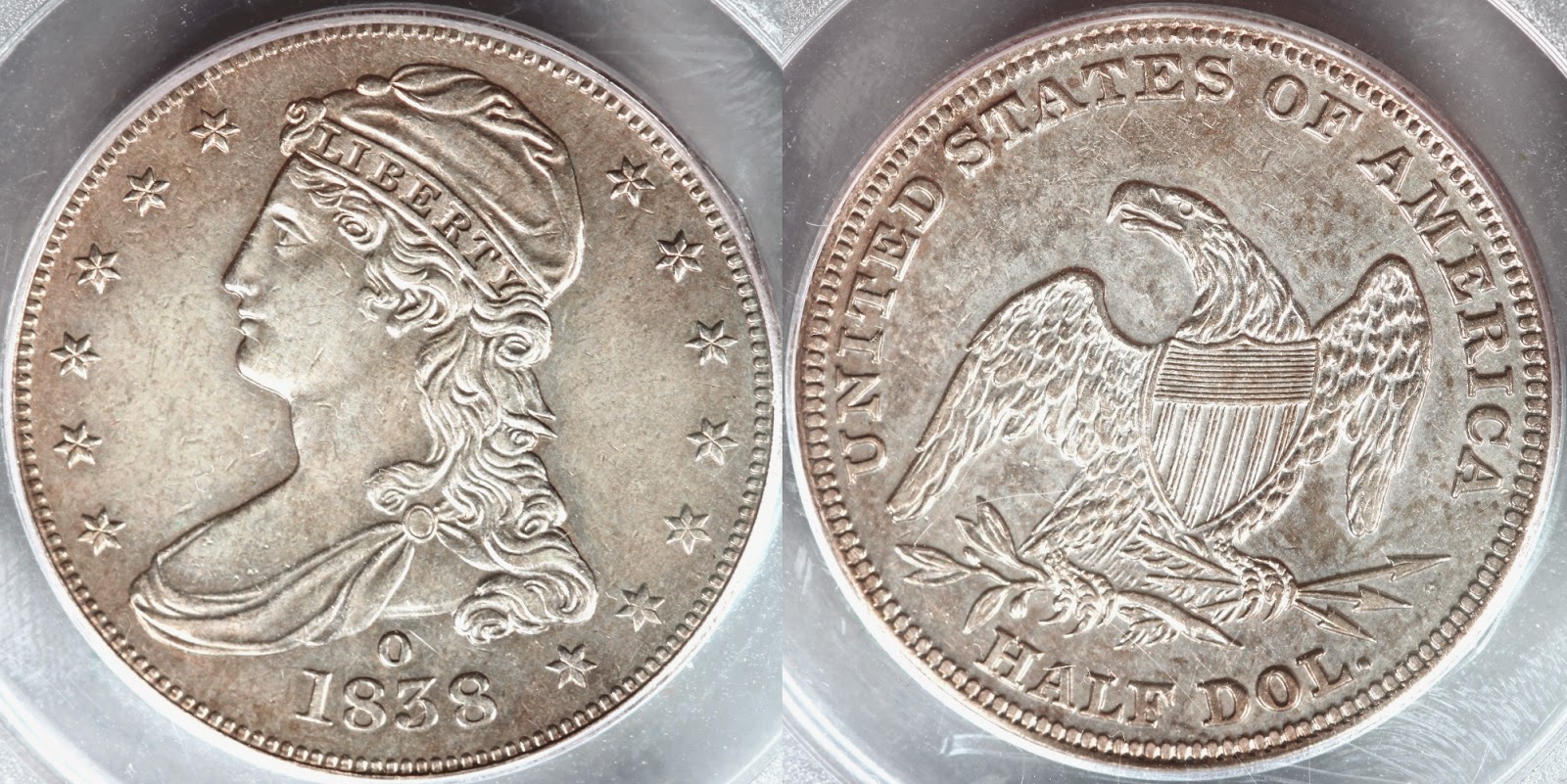 Washington University in St. Louis and the Eric P. Newman Numismatic Education Society (EPNNES) have announced plans to create the Newman Numismatic Portal, an online research tool that will become the ultimate go-to resource for the study of coins and currency. A commitment of $2 million from EPNNES will support the project.  More information is at this link:   https://news.wustl.edu/news/Pages/27786.aspx

The latest issue of the John Reich Journal has gone out and anyone not receiving their issue by Christmas should contact me at bkaroleff@yahoo.com

Also, dues for next year are requested.  There is a renewal form in with the journals.  Please fill it out and return it to Steve Crain at PO Box 1680 Windham ME 04062 (with checks payable to JRCS or John Reich Collectors Society).  Please put your membership number on the form, it is on the mailing label following your name.

The bust dollar census will be the next one published by the society in the Spring issue.  Dollar collectors should send their information to Dave Perkins.  The announcement is in the editor's notes in this issue of the JR Journal.

There will be a JRCS meeting at the upcoming FUN show.  Anyone attending the show is encouraged to come share some time with us.

I would like to make a correction to one of the quiz answers published in the most recent John Reich Journal (Vol. 24/ Iss. 3).

A reply to Jim Matthews on the bogus 1796 dime: Jim, have you tried a magnet on the coin? If magnetic, it is most surely a modern Chinese counterfeit. If not magnetic, it may still be modern, but I don’t know of any magnetic (iron alloy) contemporary fakes.

Jim Matthews' request in last week's JR Newsletter for more information concerning his counterfeit 1796 Dime raises some good questions regarding 'contemporary' counterfeits in general across all U.S. series and denominations (in my opinion).  Even though counterfeit coins over the past 200 years are for the most part, both a mystery as to origin and complexity as to manufacturer, it would be helpful for numismatists to have a checklist of sorts that helps to identify whether a fake is of modern origin (and modern Chinese origin) or of contemporary origin that collectors are interested in.

Most of us probably go by visual feel, past knowledge of older known counterfeits, obvious weight, specific gravity/metal  content and the good 'ole ring on a hard surface, but the Chinese fakes out there are so good that it is hard to tell how old the coins really are.  [There must be a 'fake coin cartel' out there ruining the hobby for all.]

Anyway, for the next Whitman Baltimore Show, I'll plan to bring some interesting counterfeits from my own collection across the Bust, Liberty Seated and Barber series to share with Jim and others if interested.  Maybe we could come to an informal consensus on the topic of fakes difficult to determine age (modern vs. contemporary)?

Posted by Editor, JR Newsletter at 12:56 PM No comments: