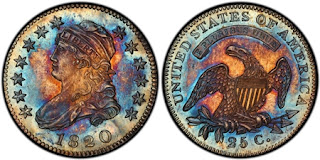 All of this week's contributions come from participants in the just-ended Baltimore show.  First, we received this from Glenn Peterson:

I was pleased to represent our club  in chairing a regional meeting of John Reich Collector Society in Baltimore on Friday, November 4th. We had the largest-ever turnout for a regional meeting with 25 people. Among the attendees were  many advanced collectors of bust coins, a number of collectors of other series of coins and several guests just learning about JRCS.

We had a discussion about the bust quarter census to be published in the next journal. I highlighted the great increase in participation since the last census of April 2014. The total number of coins reported rose from 1,495 to 1,973.  Several advanced collectors joined the census with some astonishing coins from the Pogue and Gardner collections. I was pleased to show photos of some of these remarkable coins. We also discussed bust coin errors and several members displayed double struck, off-center and clipped planchet quarters. I was pleased to have an enthusiastic conversation about these coins. A fun time for all!

We also received a report from David Perkins:

The JRCS meeting at the Whitman Baltimore coin show this past week was a good one.  If my count was right, there were 27 people in attendance, the most ever I believe for a Regional Meeting by a large margin.  Five of the 27 were guests (non-members).  Those in attendance had a wide variety of collecting interests, mostly but not exclusively the early United States silver coinage.

Dr. Glenn Peterson hosted the Baltimore JRCS meeting.  The topic was the early quarters of the United States and the upcoming JRCS Quarter Census that will be published in the next issue of the Journal.  Dr. Peterson started with a series of slides with photos of some very beautiful, rare, and high grade early quarters that are “new to the Census” in 2016.  He then talked about the upcoming Quarter Census, followed by another slide show (with old fashioned real slides!) of early silver error coins of different denominations.  There were many good questions and discussion points throughout.

After the meeting adjourned, members and guests shared coins they had brought for show and tell.  One highlight was a beautiful and recently completed date set (1796-1837) of early dimes, put together over 20 years “on a modest budget.”  All of the dimes were graded by PCGS, with grades ranging from VF to AU.  Five of the dimes were from the Gorman Capped Bust Dime Reference Collection sale which was sold in two parts in 2016 by this author.

On my way back to my table after the meeting I saw an old fashioned pile of circulated Capped Bust Half Dimes for sale at Jim Matthews' table.  This was fun to see!  I’m not sure what that coin is on Jim’s business card though….

Overall, the Baltimore show was a very good one, with many serious collectors and dealers in attendance. 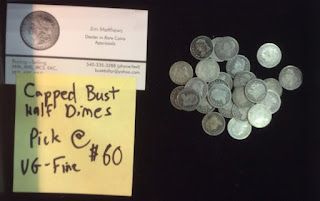 Finally, we received the following from the aforementioned Jim Matthews:

The Baltimore Show was frankly more active than I had anticipated. After months of wearisome election battles and relentless revelations, it was nice to set that part of our lives aside and focus on buying and selling coins! The usual suspects were in attendance at the show, and everyone seemed to have a good time--collectors were generally able to secure desired pieces for their collections from the numerous dealers at the show.

One unexpected surprise was Winston Zack appearing at the show from far away San Diego, California! He shared numerous examples of contemporary counterfeit coins that are being used for his huge research project of documenting and writing a two (or more) volume book on these historic and often overlooked pieces of our numismatic history. Some of the Seated coins--struck from hand cut dies created by now forgotten counterfeiters, were so comical in their crudity that I burst out laughing. Examining these folk art pieces captures so much of the American ingenuity spirit--that prior generations of people actually took the time to stamp out their own money with small common tools and whatever know-how and ability they had. These mom and pop enterprises continue all through our history, from the earliest colonial coins through our current coinage--one need look no further than the 1944 "Henning" Jefferson nickels, created and stamped out in a certain Mr. Henning's basement to be used to pay the hated toll on the New Jersey Turnpike! Some of these counterfeiting operations were huge factories which churned out countless examples of these counterfeit coins. This is an area of research that simply has been overlooked for far too long, with the exception being the superlative work by Keith Davignon on Contemporary Counterfeit Capped Bust Half Dollars. Needless to say many numismatists have long awaited such a book documenting these fascinating coins.

All in all, Baltimore once again put on a great show for dealers and collectors, and everyone I talked with seemed to have their modest expectations well exceeded.