This week's contributions are half dollar focused:
E Padget wrote (concerning Rick Beale's comments on Reeded Edge Half Dollar):
I couldn't agree more with Rick's comments about RE Halves being under-appreciated (other than for type) - it's like a whole series just dropped through the cracks, and I suppose the short series has a lot to do with it - but the real reason for my comment is: Back in the '80's when I maintained a somewhat exclusive mailing list, Jules was on it, and he bought probably a dozen of my REH's, several of which were in strange die varieties and even stranger die states - one I specifically remember was an 1838 with a reverse so badly cracked it was in 3 different planes (!).
My point is: Has Jules' work been salvaged, or even recognized? What happened to his notes? Has anyone else picked up the ball here - or has anyone else started over afresh? I think these are the 1st questions that need to be answered here....
------
Dave Lange wrote:
Regarding Rick Beale's comments about adding Reeded Edge Halves to the Overton book, I don't believe that this would be successful. These coins were almost entirely hubbed, and the only variables seem to be date position and random flaws such as cracks in the dies. This is how Jules Reiver attributed them, but relying solely on die states to identify individual dies and marriages is risky. Distinguishing individual dies in this series would have to be performed in minute detail, as Reiver and Bob Grellman did with late date large cents. These, too, are extremely challenging to attribute in all but a few dozen instances where there are obvious repunchings or flaws that were present in the die as made. In grades below XF, most late date large cents become nearly unattributable, since the attribution features are either worn away or obscured by accumulated circulation debris.
NGC does receive a few Reeded Edge Halves for attribution, but these seem to come almost solely from submitters who don't understand the distinction between such coins and the earlier issues which featured numerous hand-punched design elements. I imagine that we would include this series for attribution service if it were properly documented in a future edition of Overton, but I don't expect this to happen.

Thanks for the very enjoyable newletter!  I am still pretty much a novice at collecting bust half dollars, so I fear my contributions may be somewhat limited or elementary.  That said, one of my favorite dates of bust halves is 1809, for a variety of reasons (the least of which is the edge!), so I tend to gravitate to this date when at shows or looking through dealer inventory.  Recently I acquired a nice VF example of the O-103 marriage, this was my second example and it was struck about 10% off center.  My other example of this marriage, seems to have wider dentils on one side of the obverse than the other, but the reverse is well centered.  On this example, both sides are clearly off center (editor's note:  photos are below.  Click on the images to enlarge).  Can anyone lend any insights into this?  Is it rather common across the series, or are certain marriages or die states more prone to this sort of striking issue?
Thanks,
Jeff Tryka 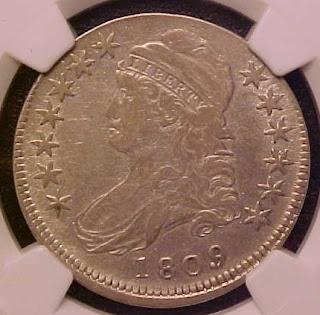 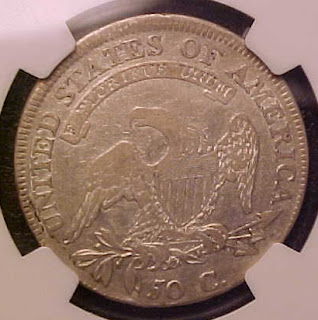 Posted by Editor, JR Newsletter at 11:18 AM No comments: