I believe readers will find this week's contributions to be quite interesting…at least I did!

First, from David Quint, comes a response to an inquiry last week about an 1804 JR-2 dime in the Heritage Gardner auction:

I have some thoughts as to the very interesting points Mike Rocco brought up regarding the Gardner 1804 JR-2 dime. Indeed the appearance of the E and R in LIBERTY do look different than in other examples of the JR-2. On early die states of the 1804 Obverse 1 (including all 1804 JR-1's), the E sports a long base and a strong upper left flag, and the R is flat across the top. As you observe later die states (with prominent cracks running through S10 through the right obverse field and through S13 to the chin and upward across the cheek of Liberty), the E begins to have problems. You can see this on Heritage's site when examining two LDS high-grade examples - the Price/Eliasberg coin (7/08:1443) and the James. T Stack coin (8/07:1622). The upper left flag and upper right flags on the E are disappearing, the E is weakening, and the top of the R is thinning. You don't see these features on JR-1's or on EDS or MDS JR-2's. By blowing up the photo of the Gardner coin one can see clear signs of retooling on the E, both at the left base and the right base. The E punch is also remarkably bold relative to most examples of the JR-2.

So what I think happened here is that very near the end of the life of the sole 1804 obverse dime die, a mint worker repunched and retooled both the E and the R (and quite possibly the reverse feathers as well) as they were becoming obviously weak. While the Gardner coin is obvious late die state based on the S13 crack, there is surprisingly no sign in the photos of the prominent crack across the cheek of Liberty seen on other high grade LDS coins. This could be due to wear or due to the same mint worker repairing the more obvious facial crack by filling it in. It would be a lot easier to confirm all this if another example with this recutting were known, but I as well have never noticed one. Good eye on the part of Mr. Rocco.

For fans of early dollars, we received this news from David Perkins:

What is believed to be a new and previously unknown example of the 1794 silver dollar was on display at the recent Whitman Baltimore show.  It was said to have shown up at a “valuation day” held by Spink in the South of England.  What was particularly notable to me when I viewed the coin was the relatively strong strike on this 1794 dollar, which usually comes with striking weakness in the lower left of the obverse in the date and stars.  The coin is graded NGC AU50 CAC.

Paul Gilkes wrote an article on this discovery and coin in this week’s issue of Coin World newspaper.  The article is titled, “1794 Flowing Hair Dollar in Spink Sale / Coin Held by British Family for Decades Surfaces During Valuation Day.”

The photo (courtesy of Spink) from Paul Gilkes' article: 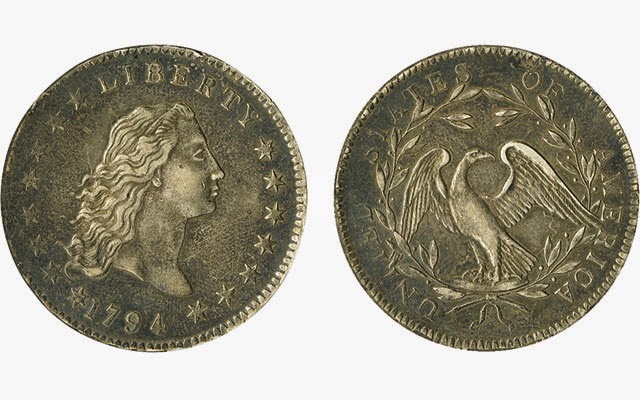 The link to the Paul Gilkes article is here:  http://www.coinworld.com/insights/about-uncirculated-50-1794-silver-dollar-goes-to-auction.html
------

I am interested to hear about Jim Matthews' contemporary counterfeit coin presentation/ talk at the Baltimore show this past weekend. If someone has a summary of the main points discussed, or better yet we have the video of the presentation which can be shared (as an idea the JRCS club could have it's own YouTube channel where these types of educational videos could be posted/ hosted), I would be very interested in hearing about it.

Posted by Editor, JR Newsletter at 12:06 PM No comments: