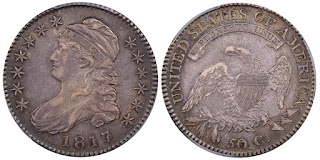 I returned from the Whitman Baltimore coin show a week ago.  Whether you are a collector, dealer, or both, you should enjoy this story. It can be titled, “Wish I was there!”

A dealer friend of mine from the East Coast knows a collector of U.S. coins based in Europe.  Earlier this year he met the collector in London and was able to look through the collection, mostly stored in 2X2 paper envelopes.  The majority of the coins in this collection were collected and put away in the 1950s and 1960s, before grading and plastic took hold in the marketplace. In the last couple of months, the dealer met with the collector, this time in Germany, and was able to look through his bank box and purchase a second group of coins from the collection.

What is unusual is that this collector liked and collected Capped Bust Half Dollars by die marriage. And he collected them while living in Europe!  I was able to purchase some of these half dollars and a few type coins in Baltimore prior to the start of the Baltimore show.  In this group of CBHs there were some overdates and a number of R-4 and R-5 die marriages and die states by Overton number, “fresh” as we say today, and off the market for decades.

I shared the 1814 O-106 with Capped Bust Half Dollar collector and specialist Steve Herrman and was rewarded with Steve sharing with me his PCGS AU53 example of O-106a, a much later die state coin with much more clashing and some dramatic die breaks. The description for O-106a in the Overton book reads,

Rev. F-s2. There are severe die cracks. A break from rim near left wing tip divides into two main branches, the lower beak crosses leaves, top of 50 C. and arrowheads to edge near middle arrowhead.  A small branch from top of C. crosses arrow points to edge above C.  The other main branch crosses shield, right wing and R to edge.  Still another from base of R to top of right wing curves under scroll. 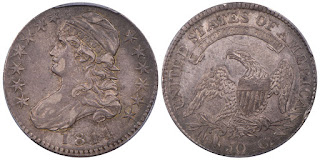 “Wish I’d been there” pulling these half dollars and other coins out of the envelopes after 50 plus years!  But I did get to see and acquire some of them.

The Baltimore show seemed a little “quieter” than past shows but was still a pretty good one for me.  And as always, I enjoyed seeing and talking with the many JRCS members in attendance.

New Purchases including all the Capped Bust Half Dollars:  http://www.davidperkinsrarecoins.com/new-purchases.html
Other new purchases are out for photographs and should be posted over the next week. 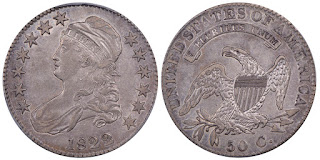 Posted by Editor, JR Newsletter at 1:16 PM No comments: