On Friday Oct 4th I had the pleasure of  a preview examination  of the NGC-slabbed bust silver coinage at Heritage's  Beverly  Hills office- all the silver bust  quarters, bust halves and bust dollars in the Eric Newman collection, most ex- Colonel Green.

On the opposite end of the spectrum, the 1804  25c B-1 AU-55 CAC appeared to me to be no better than EF-40 with considerable circulation wear to the hair, face and shoulder (all flat!) but with beautiful old album toning but no cartwheel or lustre traces.

The slabs were in contact with each other, not separated in NGC plastic boxes which surprised me as this will undoubtedly scuff up the slab plastic surfaces, thereby obscuring the coins' details and surfaces,  as they travel to shows and are viewed in Dallas and NYC.

I then examined the bust halves and the bust dollars. The 1794-95 halves were, in my opinion, egregiously overgraded by 3-12 points with none of them exhibiting a trace of original surface, lustre or cartwheel despite grades as high as  MS-63. It has always been my impression that any mint state silver coin should have at least a trace of  lustre and cartwheel. One of the 1794 halves O-108, graded NGC Fine 12,  had a reverse eagle so faint you had to tilt the coin to see its shadow! What was NGC thinking? More like G-VG at best.

The bust dollars by and large were not the gems suggested by the  NGC slabs . The distinctive "white" 1795 draped bust off-center  B-14, BB-51  MS-66+ CAC (green bean) had a wonderful coruscating cartwheel which quite literally stopped at the large right field toning area and then continued below it. A most peculiar toning area where, I believe, the cleaning solution used by Col Green was not adequately washed off. Many of the bust dollars appeared to have been cleaned with diluted acid (as was the practice back then when commercial cleaning solutions were unavailable) by Col Green and retoned naturally in their album pages over the decades. A few exceptions stood out - the 1800 Americai MS-65 B-19 BB-192 and the single bust dollar which I think was undergraded relative to the other bust dollars (the key word is "relative") : 1802 narrow date B-6 BB-241  MS-61+ which should have been MS-63 , again relative to the other bust dollars'  NGC grades.

One wonders why NGC,  rather than the market-preferred PCGS, graded the Newman coins? Undoubtedly many buyers may try (good luck !) to  switch over . In my opinion, PCGS with its must stricter grading standards, would have been "much less kind" in grading and that may have been a primary motivation in choosing NGC over PCGS. I feel as if NGC was swayed by the old attractive toning, the Newman collection name and perhaps by the notoriety of slabbing the Newman coins. We shall see if bidders are similarly influenced by the toning and slab grades rather than the coins' actual surfaces and relief wear. Will this be an example of what I call "the emperor has no clothes" syndrome?

This writer, while never specializing in bust coinage, has been in numismatics and traveled to most of the major shows and auctions over the past 5+ decades (starting auction attendance in 1959 with the Stack's Chas Neumoyer sale and their 1960 Milton Holmes sale) so I have examined up close in hand  many of the superb federal coinage appearing for auction or on the bourse floors. I know what to expect when I see an utterly superb original surface bust silver coin that today would, for example, PCGS-slab as MS-65. I distinctly recall the superb "white" 1795 draped bust dollar in JHU/Garrett. And the toned prooflike  1796-97 Lelan Rogers half dollars.  They serve as a point of reference.

And that's my opinion.

Tom Little provided us with the reverse image of an1818 bust quarter he wrote about last week: 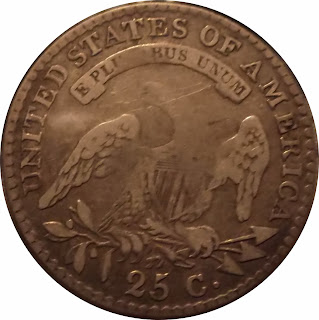 Of potential interest to collectors of Capped Bust Half Dimes is a selection of examples of scarce and rare die marriages currently being posted on the eBay.com website this month. To locate these eBay listings, readers can either (1) do a seller search for eBay user ID "numiscene", or (2) do a title & description key word search for "Loch Raven" under the category of Coins and Paper Money. Regrettably, any items already posted to the eBay.com platform, once listed there, are not eligible for any "private" offers or deals generated as a result of the item(s) having appeared on eBay.com. Any unsold pieces which have been listed are subject to being withdrawn at any time for any legitimate reason. To send inquiries, please feel free to use eBay messages to contact me and I will accommodate valid inquiries.