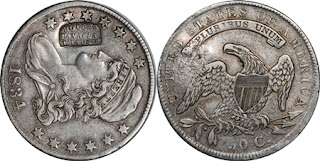 Volume 1 / Issue 1 of the John Reich Journal (JRJ) is rare, with many members either missing a copy or having a photo copy of this issue.  The publishing date is January 1986, noted at the top of the table of contents.

I was having lunch this week with fellow JRCS member and numismatist Steve Herrman.  Steve at one time had only the photo copy of the first issue of the JRJ.  David Davis found a copy of the first issue and gave it to the JRCS Board of Directors.  I suggested it be awarded to Steve Herrman for all he has done and does for JRCS.  The board unanimously agreed, and Steve has what is probably the most pristine copy of Issue 1 that exists.  A “Condition Rarity” for sure!  I think it is graded MS69 CAC….

I bring this up, since while having lunch with Steve this topic came up.  Steve mentioned to me that there was no Issue 1 of the Journal on the Newman Numismatic Portal (NNP).  I checked this out, and Steve was correct.  The set given to the NNP must have been missing Issue 1!

Here’s a question for JRCS members – what was the most unusual feature in Issue 1?  One I don’t believe we have seen since.  Send your answers to Richard Meaney, editor of JR Newsletter (jrnewsletter(at)gmail.com) and copy me at wdperki(at)attglobal.net

www.davidperkinsrarecoins.com
Posted by Editor, JR Newsletter at 12:48 PM No comments: