One contribution this week from David Perkins:

Yesterday I reviewed lots online for the upcoming Stack’s Bowers Galleries Blue Moon Collection Part 1 Sale.  It appears that many of the coins offered in this sale are from previous Stacks auction sales in the 1970s. For collectors of early U.S. Silver it appears that there are early silver dollars 1794 to 1803, but no half dimes, dimes, quarters, or half dollars in “Part 1.”  At least I didn’t find any of these denominations listed online at this time.

The Stack’s cataloger for this lot did not include the original lot number from the 1974 sale.  This 1797 Dollar was Lot 36 in the 1974 Spies sale where cataloged as, “Uncirculated, full frosty mint lustre.  Natural sea green, golden, and iridescent toning.  Just a touch of friction on the cheek (which really is only missing tarnish) from the gem category. A beautiful and rare coin.”

I have a copy of W. Earl Spies’ copy of M. H. Bolender’s The Early United States Silver Dollars from 1794 to 1803 (1950 edition) that I got from Spies’ son.  In the book, Spies noted that he paid $90.00 for this coin, graded it “Unc.,” and that it came from someone named “Norman.”  I don’t know if this is a first or last name.  Dealer Norman Schultz comes to mind, but this is only a guess on my part.  [Per my research, Schultz handled a number of very nice, high grade early dollars over the years.]

Spies also noted in his book that he had a theory that 1797 B-3 Dollars were known on both “Normal Planchet Size” and “Small Planchet.”  This theory proved to be true – the Warren Miller Collection of early dollars 1794 to 1803 (that dealer Andy Lustig and I purchased) had two examples of the 1797 B-3, BB-71 die marriage, one graded PCGS AU58 and struck on Large Planchet, and another example in PCGS XF45, struck on a small planchet.  Both of these coins have been sold.

The Spies 1797 Dollar is now graded PCGS AU-55 CAC (image below), where described in the sale catalog in part as, “This lovely original 1797 BB-71 silver dollar offers premium quality and superior eye appeal for a Draped Bust, Small Eagle dollar. Both sides are warmly and evenly toned in olive-gray with iridescent pale gold undertones evident. The strike is nicely centered with overall bold definition.” In addition, the catalog description notes the pedigree as, “Provenance: From our (Stack's) W. Earl Spies Collection sale, December 1974. Lot tag, collector tag and paper envelope included.”  Many collectors such as myself love the old flips and envelopes that sometimes accompany coins that we purchase.

I can’t wait to view these and other lots in this sale next month in Baltimore. For those attending the Baltimore show I will have three tables (along with Gerry Fortin), all under Table 818.  Please note this table number and stop by and say hello. 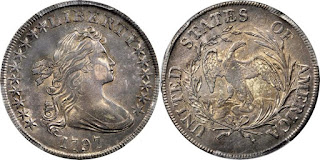 Posted by Editor, JR Newsletter at 12:59 PM No comments: