I was thrilled to be able to attend the World’s Fair of Money (WFOM) last week in Denver. One highlight of the convention was seeing so many JRCS members that I have not seen since the 2015 WFOM in Chicago, as well as meeting several JRCS members for the first time. No offense to any of you, but the JRCS member I was the most excited to meet is the gentleman pictured below, Mr. John McCloskey. It was an honor to meet a founding member of our club (and the LSCC) and one of the authors of the Early U.S half dime and dime books.

Other convention highlights for me, in no special order, were: spending time with Dr. Peterson to view images and discuss the die states of the 1820 O-106 Capped Bust half dollar, participating in the 1830 die state study at the BHNC meeting, as well as hearing Dr. Link’s excellent presentation earlier in the meeting. He reminded us that our collections represent special personal connections and are not just inanimate objects. Another talk I enjoyed at the WFOM, was hearing Wayne Homren discuss the process of how he manages to put together a beefy issue of the E-Sylum every single week (I’ve wondered about that for a while).

Of course, I was also happy to pick up a few items at the convention.  I hadn’t bought a Bust half in 8 months, so I was excited to end this drought in Denver by purchasing 4 nice Capped Bust half dollars.  At the NBS auction, I also added to my numismatic literature collection, and obtained a Chapman catalog from the 1895 Richard Winsor auction and a Green reprint of Early Coins of America, by Crosby. The last item I purchased before leaving Denver on Friday, was a collection of B. Max Mehl promotional items in their original envelope. After doing a bit of research, I concluded that the envelope was mailed in 1926. I also discovered that one of the items in the envelope, the Star Coin Book (second edition), was probably not sent to the customer at that time. The book is not dated, but according to info I found on the Newman Numismatic Portal, the book was likely published in 1908. None of the items from Mr. Mehl’s envelope are in pristine condition, but it is definitely interesting to see how coin dealers marketed their numismatic items before the existence of the internet. In fact, in a previous Penny-Wise article, it mentioned that at one time, half of the mail entering Fort Worth, TX was for B. Max Mehl!

To conclude, I have two general comments. First, I would like to congratulate Winston Zack, Louis Scuderi and Mike Sherrill, for winning (in a tie) the Best Specialized Book award in the 2017 Numismatic Literary Guild Writers Competition for their book, Bust Dime Variety Identification Guide.  Secondly, I would like to thank the JRCS members who took time out of their busy schedules to attend my ANA Money Talks presentation on Thursday morning at the WFOM.  The audience was larger than I expected, although it certainly didn’t hurt to have expert numismatic researcher, David Finkelstein, speak before me!

I hope to see many JRCS members next August, when the WFOM travels to my home state of Pennsylvania!! 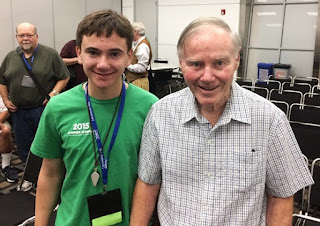 He served for 20 years as a professor in the departments of Geography and Planning at Buffalo State College and the State University of New York at Albany. His professional publications included works on environmental analysis, agricultural location theory, and regional land use planning. He worked for 12 years as a professional economic developer for the states of Arizona and New York. He provided technical assistance to rural Arizona communities, and assisted several New York communities in their efforts toward economic revitalization.

A long-time coin collector who joined the American Numismatic Association in 1981, Amato joined the numismatic cataloging staff of Heritage Auctions after he retired from his position with the State of New York. He returned to his long-time home in Albany, New York in 2010, and continued as a part-time Heritage cataloger, working on nearly every catalog for the past seven years. He recently began researching 1796 quarters with plans to publish a background and census of that issue. The Heritage cataloging staff plans to continue that research project in his memory.

His numismatic works include:
“An Analysis of 1796-97 Draped Bust Half Dollars,” The Numismatist, September 2001.

Posted by Editor, JR Newsletter at 10:44 AM No comments: