In response to Winston Zack's comments on capped bust dime rarity ratings: In going back and reviewing the correspondence between myself and the 5 other specialists listed in the Census related to the recent changing of rarity ratings, the varieties that were "nominated" but for which there was not enough of an opinion to change ratings were the 1811, the 20 JR9, the 21 JR4, the 1829 JR1, JR5, and JR9, the 33 JR6 and the 35 JR2. So Winston's 8 suggestions were not discussed by us; I think this serves to highlight the vast difference in opinions that are out there and the difficulty involved in making adjustments to rarity ratings when the data set is so far from complete. My own preference would be to formally discuss changes in rarity ratings once every couple of years, when the Census is being done, and certainly I would welcome Winston and his nominations and insight into any future dime census that I'm involved in. One thing about these changed rarity ratings is that each of us can use them, or not; but outside of our small group of dedicated variety specialists I'm not sure that there is an outside impact to our agreed-upon ratings. The major auction houses, to my knowledge, still only use the original 1984 rarity ratings, some of which we ALL agree were mistaken. To the extent that the catalogers begin to use our changes it will increase the importance of the process. But for now, the importance to me of the updated rarity ratings is simply to serve as a guide based on the collective experience of a half dozen specialists, to be used, or not, by collectors looking for some guidance as to relative rarity.  While the process we use today to determine our final rarity ratings is far from scientific, I would argue that neither was the process used by the EUSD authors; given that today we have more information than they had, it is surprising to me that Heritage and Stack's Bowers do not use the updated rarity ratings (as a dime specialist, I don't even know if they use updated ratings for other series).

Mike Sherrill wrote:
Hi, this is a response to Winston Zack’s questions about capped bust dime rarity.
Because each person sees a different subset of the extant specimens of a particular die variety, each person has a different idea of their rarity and relative rarity. Once I suggested to Russ Logan when he was compiling the JRJ census that each person also include an estimate of rarity for the die marriage, in addition to the grades of the specimens they owned. It doesn’t have to be granular to the “+” or “-“, just R3 or whatever. The important number will be the average of these estimates as more and more people participate.
In addition, an estimate of rarity for a die marriage contributes to a total number of coins that survive for the entire denomination, and this needs to be consistent with expected survival rate. I thought the author’s estimate of the total number of capped dimes was given in EUSD, but I was not able to locate it. The rarity for every capped dime variety, with only 1 or 2 notable exceptions, is probably at least 1 ‘R number’ too high, because I believe more capped dimes have survived than previously thought.
More definitive rarity ratings can also be obtained by compiling lists and photo archives of known examples, especially for the rarer die varieties. This has been done successfully with the curl base 2 dime variety by Louis Scuderi and the 1824 dimes by Jim Koenings. I believe this is where the revised R2 rarity rating was obtained for 1824 JR1. I am attempting to compile lists for 1820 JR4 and 1820 JR12. I am aware of four previously unknown examples of 1820 JR12 in the last 8 months, and I felt the marriage was R5+ before this. Rarities of 1821 JR2 as R6+ when 16 examples are included in the census, as well as 1827 JR2 as R5+ when Jim lists approximately 45 examples in his book, are a bit inconsistent, since we are certain additional examples exist. My personal feeling is none of 1821 JR2, 1833 JR3, or 1820 JR12 have a rarity higher than R5+ at this time.
I would like to take this opportunity to thank our host Richard Meaney for managing this forum, and David Quint for all his efforts on the recent dime census.

Attendance at the Baltimore Show on Thursday seemed good--but not overwhelming. The number of dealers seems to expand.  Seeking early dollars, I found more than usual this time. One prominent figure told me that we may see more coins offered at shows vs auctions as sellers sense a better return. If the JRCS met on Friday--it would be good to have a report from an attendee.

Mike Sherrill wrote a second time:
Below is a scan of a very late die state 1828 JR2 dime I acquired last year. The coin appears to have a retained cud on the reverse between the die cracks listed in EUSD. All detail is gone in this area all the way to the scroll, except a ghost of E2 in STATES can be seen with good light and tilting. Much of the wear on the reverse seems to have been absorbed by this area suggesting it was somewhat raised. The obverse just to the right of the date also shows a bit of weakness and is just opposite D STATES on the reverse. The die crack at A2 is present but cannot be seen in the scan. The dies did not appear to be rotated relative to one another when striking this coin, so the die rotation shown in the scan is accidental. I’m curious if anyone else has seen this late die state for 1828 JR2.
Mike Sherrill

(Editor's note:  Click on the image to open a larger version) 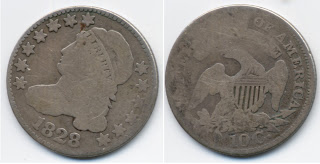 Posted by Editor, JR Newsletter at 9:57 AM No comments: