This week's issue of the JR Newsletter starts with a reminder for those of you who have one or more early half dimes in your collection.

Half dime census information is now being solicited from all JRCS members for inclusion in the July pre-ANA issue of the John Reich Journal.

Please respond before May 15, 2015 to ensure inclusion of your collection in this census. This is a hard cut-off date – no exceptions, since the completed census must appear in the pre-ANA John Reich Journal.

We also received some good news from Brad Karoleff:

The latest issue of the John Reich Journal was mailed today (Saturday)!  I will be attending the Central States show next week at table 1400. Please stop by and say hello.

Anyone not receiving their John Reich Journal by next Friday please let me know at bkaroleff(at)yahoo.com

Specifically, I am looking for delivery warrants from 1836 and 1837...the transition years from hand-powered coining operations to steam-powered coinage production.

Please feel free to email me:  stoneman101(at)gmail.com with any information you have and are willing to share. I would greatly appreciate it.

David Finkelstein wrote with an original article, "David Ott’s Account of Gold – Part 1" – which is below:

David Ott first appeared on a Mint warrant when he was paid $24.17 on January 7, 1793 for “assaying coins at the Mint”.  His temporary assaying work was done in response to the following House of Representatives motion of November 29, 1792:

“Resolved, That that the President of the United States be requested to cause assays and other proper experiments to be made, at the Mint of the United States, of the gold and silver coins of France, England, Spain, and Portugal; and a report of the quantity of fine metal, and of alloy, in each of the denominations of the coins, to be laid before this House”.

David Ott next appeared on a Mint warrant when he was paid $133.33 on February 20, 1795 as a Mint employee for “53 days work at melting and refining in the Mint” from November 1, 1794 to December 31, 1794.  The Mint & Coinage Act of April 2, 1792 failed to define the position of Melter & Refiner.  As a result, silver and gold deposits could not be “legally” melted and refined into ingots with the precious metal and alloy percentages that were mandated by Congress.  Without melted and refined ingots, the ingots could not be rolled into sheets, the sheets could not be punched into planchets, and the planchets could not be struck into coins.  On March 3, 1795, President Washington signed the Supplementation of the Mint Act.  This act defined the position of Melter & Refiner.  It also allowed the Director of the Mint to employ a Melter & Refiner Pro Tem until one could be nominated by the President and approved by the Senate.  David Ott was the Mint’s first Melter & Refiner Pro Tem.

One of the Mint ledgers stored at the National Archives and Records Administration is David Ott’s Account of Gold (see Figure 1).  One part of his ledger identifies when gold bullion deposits were received from the Treasurer of the Mint, and when melted and refined ingots were delivered to the Chief Coiner (see Figures 2 and 3).

Gold bullion (in any shape or form) was first deposited with the Treasurer of the Mint.  After the deposit was assayed and the equivalent value in United States money was calculated, the deposit was provided to the Melter and Refiner Pro Tem or the Melter and Refiner.  [Although not germane to this article, it should be noted that the silver deposits that were melted and refined prior to the Supplementation of the Mint Act were illegally done so by Assayer Albion Cox (and most likely with the help of David Ott) as directed by David Rittenhouse.]

The first gold bullion deposit was received by Treasurer of the Mint Dr. Nicholas Way on February 12, 1795.  The total (or gross weight) of the deposit was 130 Troy ounces 4 pennyweights (or dwt) 9 grains.  After the deposit was assayed, it was determined that after it would be melted and refined, it would weigh (or have a standard weight of) 128 Troy ounces 0 dwt 18 grains, and have a value of $2,276.22.  See Figure 4.

An Experiment Was Conducted

Before gold coins could be struck, the gold bullion had to be melted and the existing alloys and impurities had to be removed.  Then, copper and silver had to be added such that the resultant mixture complied with the Mint & Coinage Act and was 11/12ths gold and 1/12th silver / copper alloy.  Next, the molten mixture had to be poured into ingots.  After the ingots cooled, they were to be transferred to the custody of Chief Coiner Henry Voigt.  He would then be responsible for having the employees in his department roll the ingots into sheets, punch planchets out of the sheets, adjust each planchet to the appropriate weight (if it was too heavy), then strike gold coins.

Prior to July 21, 1795, no gold coins were ever struck by the United State Mint.  On July 21, 1795, shortly after the first transfer of gold bullion took place between Dr. Nicholas Way and David Ott, 16 Troy ounces 10 dwt 12 grains in gold, “before it was melted”, was provided to Chief Coiner Henry Voigt “for an experiment” (see Figure 3).  Note that Moses Brown’s deposit consisted of ingots (see Figure 5).  Most likely, a gold ingot from Moses Brown’s deposit was provided to Henry Voigt to confirm that it could be rolled into a sheet of the desired thickness, and that planchets could be properly punched out of the sheet using the Mint’s existing equipment

The experiment was obviously successful, and gold coinage production began.  The gold bullion from the first four deposits was melted and refined, and 6 ingots, weighing 204 Troy ounces 15 dwt 5 grains, were delivered to Henry Voigt on July 23, 1795 (see Figure 3).  On July 31st, 744 Gold Half Eagles (valued at $3,720) were transferred from Chief Coiner Henry Voigt to Treasurer of the Mint Dr. Nicholas Way via the Mint’s first gold delivery warrant.  See Figure 6.  To be continued… 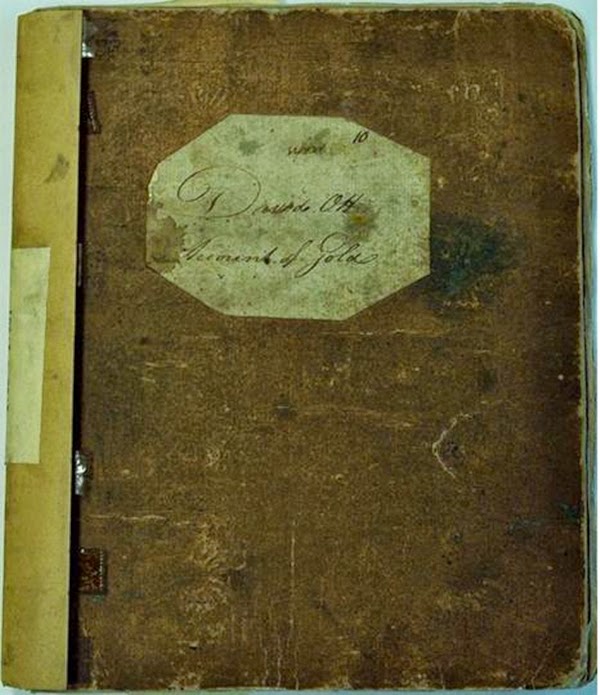 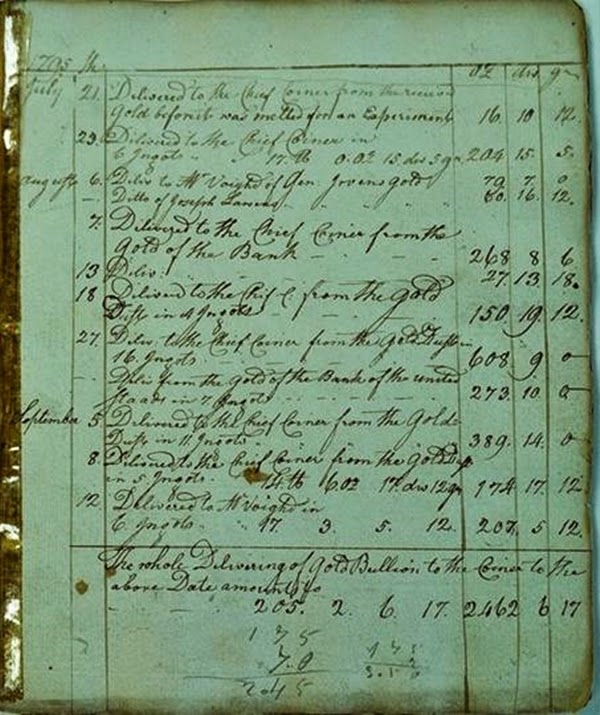 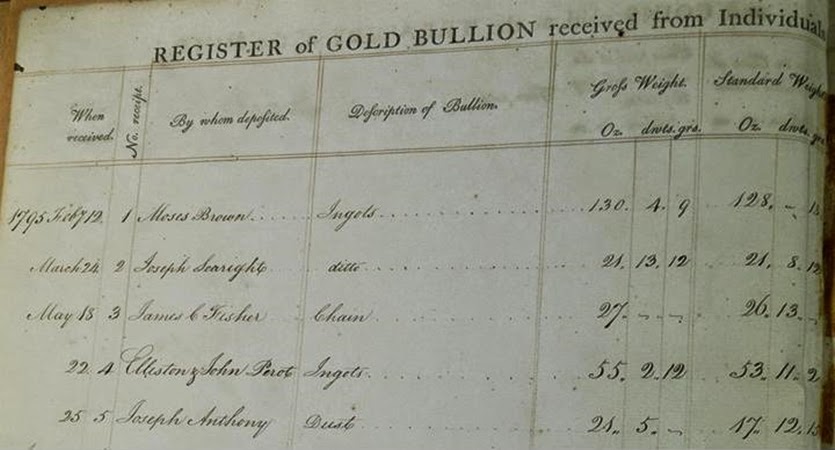 Finally, a reminder from Richard Meaney:

Nominations for the JRCS Hall of Fame class of 2015 are now OPEN. However, the nomination period will close soon to allow the Hall of Fame Committee sufficient time to consider each nominee and select this year's honorees.

The membership is encouraged to send nominations for the Hall of Fame. You can nominate candidates for either the veteran (those who contributed before the advent of JRCS) or the modern (those who have been members of JRCS) categories. Please include any pertinent information about the nominee that you feel necessary. Nominees will then be voted on by the HOF committee and the inductees will be announced at the annual meeting at the ANA convention in the summer.

Posted by Editor, JR Newsletter at 1:10 PM No comments: