I encourage half dime collectors to bring with them to the ANA any 1829 LM-16 half dimes they may have.  Richard and Mirek Kiec would like to examine as many 1829 LM-16.1 and LM-16.2 half dimes as possible in order to gather sufficient information to write an article for the John Reich Journal on differentiation between these two remarriages.  Richard will be easy to find at the show.  Just go to table #435, where he will be assisting David Perkins.

Hello members of JRCS,
We are having exceptional meetings at ANA in Denver this year and I want to invite everyone to attend.
JRCS will have its annual meeting Wednesday August 2nd at 8:00 AM in room 407 of the Convention Center. Barry Sunshine and Jim Matthews have graciously agreed to give a talk on BUST DIMES, a series we collect that sometimes doesn't get the attention it deserves!

Bust Quarter Collector Society (a sub-specialty club within JRCS) is having its annual meeting Wednesday, August 2nd at 2:00 PM in room 505 of the convention center. David Lange will discuss the new discovery of 1822 B3 Quarter certified by NGC.
Bust Half Nut Club will have its open meeting (everyone invited) Thursday , August 3rd at 2:00 PM in room 505 of the Convention Center. Award Winning Numismatist Chuck Link will discuss his completion of his collection of Bust Half Dollars by die variety and die state and the friends he made along the way. This should be an excellent program.
We expect the meetings will be well attended. So come, visit your friends in JRCS, and enjoy the programs.
See you there!
Glenn Peterson MD JRCS BHNC
------
David Finkelstein wrote:

Len Augsburger, Joel J. Orosz, and David Finkelstein have pooled their research, and have collaborated on a Money Talks presentation regarding the 1794 Dollars.  The presentation will be on Thursday, August 3rd, at 10:00 AM, in Room 501.  David Finkelstein will be presenting images of never before published Mint documents that provide a definitive understanding of:

1.  Whose silver bullion was used for coining the 1794 Dollars,

2.  The Mint’s processing of that silver bullion,

Multiple documents have been rediscovered at both the National Archives and Records Administration, and the Historical Society of Pennsylvania.  These documents provide the contemporary evidence that answer the questions that have plagued numismatists for over 150 years.

The 6th edition of Auction Appearances & Prices Realized for Early United States Quarters 1796-1838 or the AAPR for Bust Quarters is now at the printer and available for pre-order.

It has been three years since the last edition was published. This was due to time constraints brought on by life & work on a new series of books covering the early United States half dollar series. Of which, the first volume is now available and work is progressing on the second.

This compilation, encompassing over 200 pages, contains over 10,000 auction listings, from over 12 years of study and research, and up to 15+ years of statistical information relating to the die marriages found in the early quarter series. Listed within, you will find much more than just a list of auction appearance and what that particular coin sold for. You will also find listings of the grading service; the unique serial number given to each coin when available; die stage information and cataloger comments. All grades from all die marriages of the bust quarter series from 1796 to 1838 are included in this list.

The complete holdings of the following major collections were also added:

Several major collections that included bust quarters have been sold in the last few years, such as Pogue, Gardner and Newman, and these are also included in this edition.

In the recent past (the last 5-10 years or so), each of the major auction houses have begun to keep an online archive of past auctions and the coins sold. These archives are a tremendous source of information to the collector and each firm should be commended for continuing to fund and support this endeavor. Unfortunately these archives may or may not continue to exist into the future, due to mergers and companies being sold. So, at least for the bust quarter series, it is hoped that this compilation can be a permanent record for posterity.

Pre-orders for this issue can be purchased on my web site for $35. This includes free shipping for a limited time on pre-orders only, afterward shipping will be $4:

Or, you can send payment via mail to:

Any questions feel; free to send me an e-mail:  SMT115(at)aol.com 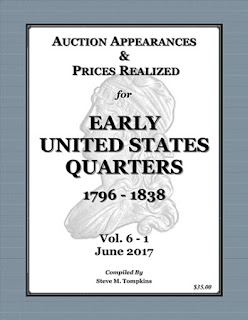 Finally, an observation from the editor:

I think it was David Kahn who wrote in an email to customers a week or two ago that this ANA promises to be the biggest and best show of the year.  Even from as far away as Alaska, I feel the growing excitement for this show too!  There is not a better opportunity to learn about "our types of coins" than this show.  Presentations by the likes of Finkelstein,  Augsburger, Orosz, Link, Matthews, Sunshine, and ANA's 2017 Numismatist of the Year David Lange are just some of the great opportunities available.  Specialist auctions for half dollars (held by Sheridan Downey) and half Dimes (held by David Perkins) along with extensive auction by Stack's and Heritage will keep collectors busy!