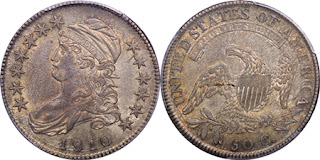 From David Perkins:  A Few Highlights from the 2017 FUN Convention and Show
Picture an overflowing football field filled with coin tables, collectors, and dealers and that is what this year’s FUN Convention in Ft. Lauderdale looked like to me.  The bourse probably stretched wider than a hundred yards!
For me, FUN was an enjoyable show.  First of all, I was able to view a lot of great coins.  In particular, I got to see many early dollars 1794-1803 and more early quarters than you’d normally see at any show.
As previewed in the December 4, 2016 issue of JR News, the Bruce Morelan Collection of Early Dollars 1794 to 1803 was on display at the PCGS table.  I had a fair number of collectors come by my table and mention this great display and collection.  In addition, the Brent Pogue Draped Bust, Small Eagle Dollars were in a case at the Stack’s table which was located close by.  I stopped and looked at the Pogue Dollars a couple of times as I was crossing the bourse.  How often in your lifetime will you get to see this many high grade early dollars in one location!
A JRCS member was successful in the Heritage Auction being the winner bidder on a lovely and very desirable 1799 B-23, BB-159 Dollar, struck from the latest die state known to me, with a large arc-like die break and other die cracks across the obverse.  At least five JRCS members that I know, including me, wanted this coin!  This coin graded PCGS XF45 CAC and had great eye appeal, color, and surfaces.  This coin is pedigreed to the early dollar collection of the late Martin “Marty” Oghigian, although this was not mentioned in the catalog description.  There is only one Mint State example known with this late die state, the Amon Carter, Jr. Collection Specimen.  All of the other examples that I know of or have seen grade VF or lower.  There are under ten examples of this late die state known to me.
We had fun (pun intended!) with this coin and the late die state at my bourse table the day after the auction while comparing two examples of this late die state 1799 Dollar.  The owner of a nice VF example had brought an enlarged photo (8-10 inches in diameter!) of his example with him to FUN to compare.  I called the owner of the new XF45 example on the phone and he brought his coin to the table and the three of us along with Bob Stark were able to study and compare the two coins.  The die states on these two 1799 Dollars were deemed by all to be virtually identical.
A long-time dealer from Maine had a very full case of early Draped Bust and Capped Bust Quarters at his table, teasing many of us for a couple of days as they weren’t available for sale.  And then they were.  Another collector had a good portion if his collection at FUN which I enjoyed viewing for a second time.  I had seen this collection once in the past.  In addition I had one case with 20 Capped and Draped Bust quarters for sale.  Before the show was over I was able to add to my inventory a lovely 1806/5 Draped Bust Quarter in P58 CAC (ex. Rory Rea) from this Maine Collection, along with two exceptionally nice and choice for the grade Capped Bust 25C die marriages from another collector’s collection.
The JRCS meeting Friday morning was a short one, but a good one.  There were about 20 JRCS members in attendance.  Dave Finkelstein’s talk on the Workflow of the First U.S. Mint was a good one.  David left us hanging a little after showing us a letter that a 1794 Dollar was given to George Washington for his inspection.  All of us were wondering where it is, or which one of the known examples it is!
And lastly, it was great to see so many collector and dealer friends.  And at the FUN Show I was able to thank Julian Leidman in person for sending me information regarding a previous JR News story about the collector whose name was on the envelope of the mailing envelope for a Bolender catalog that I own and mentioned a few weeks ago in JR News.  Julian wrote, “[The collector] pictured on the envelope might have moved to VA, as he had some early dollars; one of which may have been a 1794 with a counterstamp on it, which was removed by dealer Phil Lampkin in the 1970's and sold as damaged.”  Thanks again Julian!
W. David Perkins
Centennial, CO
www.davidperkinsrarecoins.com 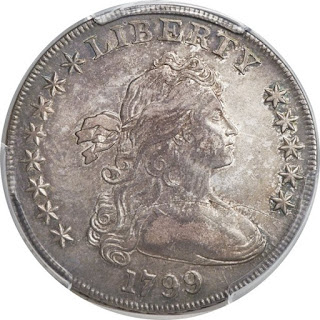 Posted by Editor, JR Newsletter at 6:52 PM No comments: