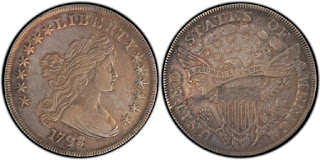 Our contributions for the week come from David Perkins and Sheridan Downey.

I spent a few enjoyable hours last weekend looking through the Newman Numismatic Portal (NNP).  I’ve collected M. H. Bolender auction sale catalogs for a decade or two.  The NNP now has a long run of these sale catalogs scanned and online, from 1925 to 1960.  The 1925 through early 1928 catalogs were printed in a small size format.  The September 1928 catalogs and later were approximately the size of our John Reich Journal.  At one point in the 1950s Bolender went back to the small format for these catalogs.

Milferd H. Bolender was a dealer and was originally from Freeport, Illinois.  He eventually retired to San Marino, California.  Bolender was the author of THE UNITED STATES EARLY SILVER DOLLARS FROM 1794 TO 1803; the first edition of this book was published in 1950.  This book essentially updated and replaced the Haseltine Type Table sale (1881) as the primary reference for the early dollars.

As I paged through a fair number of the catalogs, I noted that the early U.S. silver dollars 1794 to 1804 were cataloged using Haseltine numbers from 1925 to 1949 or so, then Bolender numbers from 1950 on.  It was fun to see half dollars attributed by both Haseltine and later Beistle numbers, and half dimes with Newlin numbers!  As might be expected, early quarters and dimes seemed to appear much less frequently in these sales than the half dimes, half dollars, and early dollars 1794-1803.

What amazed me the most was that by 1959 Bolender stated he had over 16,000 names and addresses on his mailing list.  By 1960 this number was over 20,000!  I can only imagine the efforts and cost that went into printing the catalogs, typing the name and address, inserting the catalogs into envelopes, and mailing all of these in the 1955-1965 time frame!

I have a number of Bolender sale catalogs in the original mailing envelopes that I purchased years ago from Numismatic Literature dealer Charles Davis.  I’ve attached a photo of the mailing envelope for the June 14, 1944 Bolender 159th Sale.  Note that the address appears to be typed on the envelope, and Bolender had a postage permit (coincidently No. 159).  I especially got a kick out of the “DATED SALE CATALOG / USELESS IF DELAYED” above the return address on the top left of the envelope! 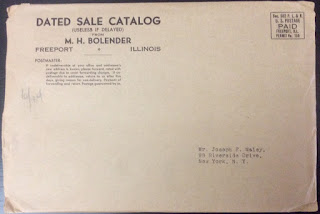 I just finished cataloging the lots for my upcoming FUN Show Sale, Mail Bid Sale No.44.  The sale will close Thursday Jan. 5, 2017 at 6 PM EST, during the FUN Show in Ft. Lauderdale.  It's been a long while since I so thoroughly enjoyed fondling and describing such a wonderful group of bust halves.  The consignors, notably Keith Davignon, outdid themselves.  There is not a dud in the group of 103 pieces.

The Sale is loaded with pretty coins, rare Red Book and Overton varieties and fascinating die states.  I will be posting descriptions on my web site early this week: www.sheridanscoins.com.  Lance Keigwin's photos may be seen there now.  The printer promises to have the written catalog ready for mailing by week's end.  Recent bidders will automatically receive a copy.  Others who plan to bid in the sale may request a copy by email, sdowney3(at)aol.com.  Lot viewing by Express Mail and Fed Ex. is going on now. The lots, of course, will be available for preview at my FUN bourse table, Jan. 4-5. 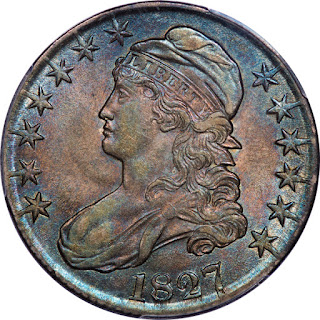 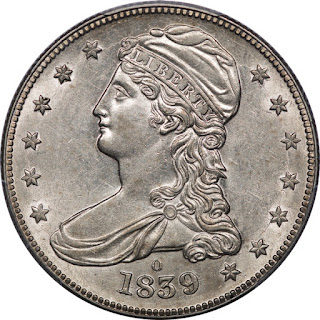 Posted by Editor, JR Newsletter at 12:08 AM No comments: