We are still in need of die marriage proposals for the happenings as I need to get this into the program for the convention.
We will be showing the 1806 B5 and B6 quarters
We plan to show the 1798 Bolender 14 bust dollar
Please send along the proposals for the other denominations to this website and myself at cascades1787 (at) yahoo.com
I hope to see many of you there for part or all of the convention.  The "happenings" happens Thursday night and you can send along your examples with a friend...or friendly dealer.  It is a monitored event.
Nathan Markowitz
------
Dick Wells wrote:
I picked up a neat 1818, B10 bust quarter at FUN.  It has a counterstamp on it that runs from approximately K11 to K6 that reads, "R.A. MILLER" (photo attached). It's not identified in Brunk, but it appears to be a genuine counterstamp.  Can anyone shed any light on it?
Thanks,
Dick Wells

editor's note:  You can click on the image below to open a larger version of the image. 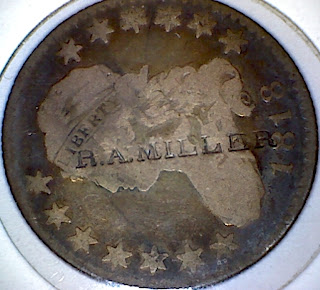 Just a little note to update the membership on the next issue of the John Reich Journal.  I have put a little family illness behind me and have received most of the information needed to put out the next issue.  I hope to be at the printers by the end of the month which would put it in the hands of the membership next month.  Sorry for the delays in printing, but I can only issue a journal when I have enough to print.  So, everyone get busy and send me something for the next issue!!!

FUN was interesting, if not very profitable.  There seemed to be a distinct lack of half dimes available on the floor.  (Maybe we just are getting older and couldn't see any of them)  The half dollars at the auction were a mixed bag.  Some of the tougher R5's seemed a little cheaper than I expected, but the competition for the nice AU coins was fierce.  It seems that there are a few strong hands looking for the same coins to complete their sets.  I know a couple of "Nuts" that were thrilled to add a DM or two to their collections.  Congratulations!  I know how hard it is to do that at a certain level, no matter how much, or little money you may have...

Rumors exist of another new early dime DM.  I hope to have more on that later......

Oh, by the way, golf was fine on Saturday except being paired with the club pro and a former player on the senior tour....Talk about intimidation....Pared the first three holes then....you get the idea.  Still had a great time including the 12 foot gator.

I really enjoyed seeing many of the guys.  It is too long between chances to get together for coins and dinner.  Thanks for a great time everyone, especially the FUN volunteers who make the show possible for the rest of us.


Regarding Reeded Edge halves...
They seem to be under-appreciated. Perhaps, for some, this is due to their short mintage run. However, that should endear them to specialists all the more! That's not happening on the whole, and I think the reason is their exclusion from the Overton book.
Hopefully the next revision of the Bust Halves reference will include them. Otherwise, we have this small yet vital area of American numismatic history uncovered in formal literature.
Sincerely wishing everyone a wonderful New Year,
Ricky B and Robin Grace
------
A few notes from your editor:

I sometimes receive an email asking about John Reich Collectors Society membership issues.  Here's a brief summary of answers to such questions.

Occasionally, someone wants a back issue of the John Reich Journal.  If you want a certain back issue, please send an email to jrnewsletter (at) jrcs.org and request the issues you need.  Not all back issues are available, but those that are will set you back just nine dollars per issue (shipping is included in that price).
Posted by Editor, JR Newsletter at 8:47 AM No comments: