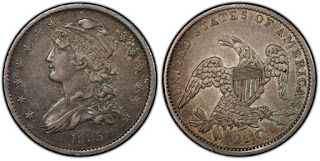 We received multiple responses to Jeff Tryka’s inquiry into the 1814 O-107 Prime:

- The earliest state of the die for 1814 O-107 has no die chip in the N of UNITED. It is extremely rare with perhaps a handful of known specimens.

There some dealers for who this sort of variety is extremely attractive.  I would suggest Sheridan Downey! (sent by John Okerson)

- The absence of the die chip in N in UNITED suggests an early, scarce die state. I am sure more learned bust half collectors will have more to contribute.  (sent by Lance Keigwin)

A few weeks ago, the John Reich Collectors Society held a virtual meeting via Zoom, and one of the featured speakers was Daryl Haynor, the author of a new book on classic head gold coins entitled, "United States Classic Gold Coins of 1834-1839" which presents a detailed analysis of the various die marriages for Classic Head quarter eagles and half eagles of that period.  For someone like me who collects bust half dollars by die marriage, this was an interesting new book and new avenue for my nascent collection (or perhaps accumulation) of Classic Head half eagles.  I ordered the book and after it arrived I began reading and attempting to attribute my coins by die marriage.  Even among my small collection, I found duplicates, but it was also a new dimension of collecting this sleepy series.

Perhaps the most interesting discovery was on the first coin of this series I ever purchased, which was in a lot of two 1836 "sea salvaged" coins in ANACS AU details holders that I bought maybe 20 years ago.  I kept the most attractive one and sold the other, but the one I kept turned out to be an HM-1 die marriage, rated R.6 and the rarest die marriage I own in the series!  This one is characterized by a very interesting die crack on the obverse, extending from the edge across Liberty.  If any of you are interested in this series, I highly recommend this book, available at Wizard Coin Supply.

Posted by Editor, JR Newsletter at 3:49 PM No comments: