Die states seem to be getting more popular these days with collectors of early silver from half dimes to dollars.
I recently corresponded with a customer, and relatively new collector of early dollars, who reported a new die state for an 1800 silver dollar that he had recently purchased.  He had noted that this die marriage was only known in the early or “Perfect Die State.” This will be reported in more detail in upcoming article in JR Newsletter or the John Reich Journal.

At the recent Central States show, a collector purchased two early silver dollars from me from the Miller Early Dollar Reference Collection that Andy Lustig and I are selling.  This collector had never previously owned or purchased an early dollar.  One of the Dollars he purchased from me was an example of 1798 B-16, BB-110 in an extremely rare early die state, with no signs of the die break that forms over the 198 of the date and eventually continues to the rim under Star 1.  In the latest die state known a large cud forms under this crack.  I sent him the link to an article I’d authored in the John Reich Journal on the die stages or states of this marriage.  The article was titled, “Die State Study for the Very Rare 1798 B-16 Dollar.” 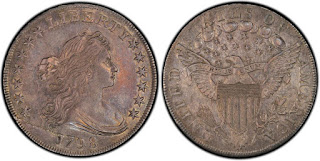 For those interested, here is a link to the article on the 1798 B-16 Dollar and the multiple and distinctive die states it is known to come in.  The article is now found on the Newman Numismatic Portal on page 21 of the December 1998 issue of the JR Journal.   You will enjoy the die progression photos in the article, with six different and distinctive die states.  At the time of the article I had not seen an example with no signs of the break starting over the 198 of the date.  I’ve now seen and recorded three examples of this the earliest die state known.
https://www.archive.org/stream/johnreichjournal12n1john#page/20/mode/2up

On Friday, I picked up a new consignment of 67 Capped Bust Half Dollars ranging in grade from PCGS VF35 to AU58.  In looking through these, the consignor had noted on an 1819/8 “Large 9” Half Dollar that Star 2 was boldly recut, and that there was something curious between the two upper star points.  It looked to me like a stem with a flower bud opening!  Or was it a snake or serpent with its mouth slightly open?  Upon further study, it sure looks like a steam and flower bud opening up to me, very similar to the stems and buds on the reverse branch.  I shared this with Steve Herrman on Saturday when we got together for lunch.  He had never noted this anomaly before personally, but quickly found other examples in the Heritage archive, enlarged the photos of the coins, and studied Star 1.   There were two examples of this die marriage, 1819/8 O-104 and 104a.  The “stem” was weaker (partially missing) on the later die state, O-104a.  Was this die punched by mistake? 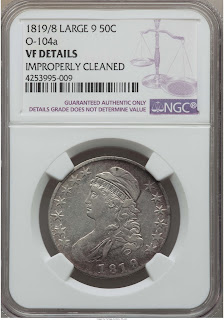 Have any of the Capped Bust Half Dollar Specialist Collectors noted this before, and what caused it?   If so, please contact me at wdperki(at)attglobal.net and I will share this with JR Newsletter readers in a future issue.


JRCS Members,
As we prepare for the upcoming ANA convention and our annual meeting there are a few things I would like everyone to think about:
1.  We need content for the next issue of the JR Journal.  Articles about personal experiences, research papers, personal observations, questions and ???? are all welcome for publication.  Please send your submission(s) to bkaroleff(at)yahoo.com.
2.  JRCS has a new updated website.  Steve Herrman previously wrote about it for the JR Newsletter.  He led the committee for the update and did a wonderful job!  Now we have to pay for the efforts.  We have decided to have a bid or buy sale of donated items to raise money to pay for the cost of the work.  We want to keep the donations to a $50 value or more for the sale.  I will be coordinating the effort so please send an email to me at bkaroleff(at)yahoo.com to discuss your donation before sending it.  We are also accepting cash donations should you decide that is more to your taste.  Cash donations are tax deductible as we are a 501(c)(3) educational society.  Cash donations should be sent directly to Dave Perkins at PO Box 3039 Centennial, CO 80161.  We will be selling the items this Fall after the ANA convention.
Donations already on hand include:
Cash of $200 donated by Winston Zack
A complete set of the JRJ donated by the club archives.
An autographed catalog of the Ed Price collection of early dime and quarter eagles sold by Heritage in 2008, donated by Ed Price.
A two volume hardbound set of Silver Dollars and Trade Dollars of the US, A Complete Encyclopedia written by Q. David Bowers donated by Brad Karoleff
Please consider participating by donating something for the sale, bidding or buying from the sale or BOTH!
If you have not already visited the new website, please take the trip soon.  http://www.jrcs.org
Please give us feedback after your visit either by posting to the JR Newsletter or emailing any of the officers with your comments.
Happy collecting,
Brad

Posted by Editor, JR Newsletter at 12:28 AM No comments: