Bob Stark is the sole contributor this week.  He wrote about a 1798 B-28  BB-118 Bust Dollar, specifically about its reverse die:

Bowers (2012) lists a Die State I as struck from a "perfect reverse" die.  Subsequent Die States II to VI cite the approximately parallel cracks between the left side of the tail feathers and right side of the eagle's right talon.

Recently, a specimen appeared with what appears to be a single line, just left of the tail feathers, without a clear second line crack. An image is below; however, I haven't seen the coin. This "single line" crack was not anticipated by Bowers or by me ( 1992 JRCS Journal article).

I'll value readers who have a B-28  BB-118 to send me its die state, or better, its image. I'll gladly share new information with responders.

Best wishes and thanks
Bob 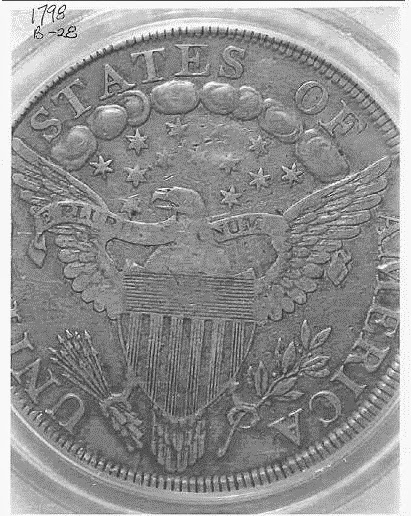 Posted by Editor, JR Newsletter at 12:22 PM No comments: