We had one contribution this week.  Alan Bricker wrote:

Following up upon Richard Meaney's commentary in the August 26th edition of JR Newsletter, to the best of my recall I first reported on the existence of the new prime marriage of the 1830 LM-1 half dime in JRNews during April or May of 2007. This report came about on the heels of the revelation of the new 1835 "LM-12" marriage. What happened, as I announced at the recent JRCS meeting in Philadelphia, was that I had actually purchased the AU discovery coin for the new 1830 LM-1 prime marriage on February 10, 2000 at the Long Beach Expo (incidentally, that day was the inaugural day for the remarkable S.S. Central America "Ship of Gold" traveling exhibition). I could not recall having ever before seen such a crisp, sharp-looking 1830 V-10 (LM-1) showing no clashmarks and no visible die cracks. I had intended to do some further studies and side-by-side comparisons with the new purchase after returning back home, however, the coin slipped into safe deposit along with some other acquisitions and was thenceforth forgotten for a few years. The spring 2007 JRNews reports on the new 1835 "LM-12" soon had me traveling back to the safe deposit facility to review some 1835 half dimes, and after seven years the prime-marriage 1830 LM-1 specimen was serendipitously "rediscovered". At this point in the spring of 2007, I reported in JRNews on the existence of the new prime marriage of 1830 LM-1 and, for lack of a better idea, suggested a possible designation of 1830 "LM-1.0".

Editor's Note:  I have added images of my 1830 LM-1.1 below.  You can click on either image to view a much larger version: 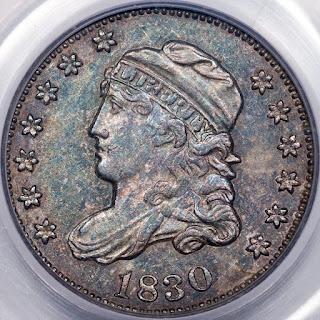 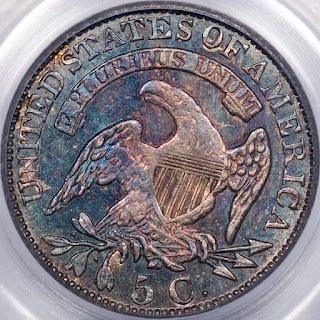 Posted by Editor, JR Newsletter at 8:06 AM No comments: