Last call for anyone who would like their Draped and/or Capped Bust Dimes included in the upcoming JRCS Early Dime Census. Please send a list of the varieties and conditions of your coins to David Quint at dimecensus (at) yahoo.com

From David Perkins:  Great photos!  Thanks.

From Craig Eberhart:  Nice photos Richard!  Did you take these?  If so, what lens are you using for the photo beyond the normal macro of 1:1?
(Editor's response:  I did not take these photos.  The photographer is Mark Goodman.  I don't know the specifics of what he used to image this particular coin.  Mark has written a book (now in second edition) on numismatic photography that I highly recommend:  Numismatic Photography, 2nd Edition, by Mark Goodman.  Available through Amazon.com and other booksellers)

From Paul Kluth:  Great looking Half Dime and with strong clashing to boot to go with the wonderful toning!  Is that an early stage bisecting die crack coming out of K-12 on the obverse?  The clashed date on the reverse in splendid rainbow colors is just awesome.  Thanks for sharing as it made my numismatic moment+++ for the day.
(Editor's response:  Thanks, Paul.  I was first interested in the coin for its striking colors.  Further study showed me the die crack which you described, the clashing all over, and the clashing of the date onto the reverse of the coin.  I've not seen too many examples of this die marriage with the date clash on the reverse...definitely something to watch for when looking at 1837 half dimes!)
------

Dime collectors should submit their collection data to David Quint as soon as possible, since I plan on sending out the next issue of the John Reich Journal, which will include the dime census, in October/November.
------

I have inlcuded Bust Half Dollar photos used in the first attempt at axis lighting.

An interesting obverse, it appears the planchet may have been pre-struck under high pressure by the edge of another Bust Half.  One might read DOLL HAL upside down in reverse raised letters inside the gash. Would be happy to send the coin to an expert who might have a better than 30X microscope. 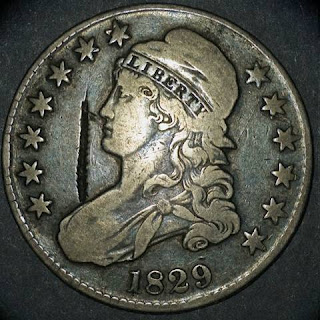 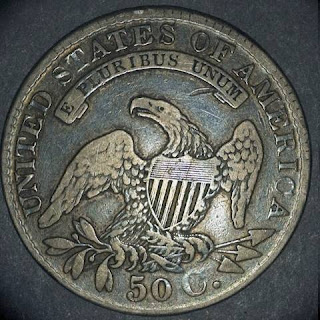 
The Dr Hesselgesser Dollar Sale
Labor day was a holiday for most but not for the folks at Goldberg who were charged with the auction of the largest die marriage set of early dollars to cross the block since the Bill Luebke collection at the January 2007 FUN sale.  I had a front row seat.  But I did not attend.  Instead the wonders of wi-fi and the iPad allowed me to watch live from my home desk whilst listening to the strong thermal breezes of late summer.  What would Jules Reiver, or AJ Ostheimer think, let alone Mister Bolender himself.   Methinks it was rather cool as 137 dollars crossed the block in addition to those he sold in the June Goldberg sale.  Herein are just a few comments on a very large sale.  I defer to others who may have more knowledge.  In honor of Bill Luebke and his service to JR news; I should start with:  “And away we go…”

One might summarize the sale as loaded with high condition census examples; indeed many of the coins currently graded AU or better.  Given the extent of the collection many R7s and R8s graced the pages of the dedicated catalog amongst the more “common” coins.  Many of the PRLs seemed amazingly close to estimates as I watched the numbers tick by…I have not carefully analyzed the results.  Amongst many examples to highlight I have chosen a few….

Lot 5001, 1795 B3  was an early favorite as a pretty coin and both a condition rarity and with a neat(and rare) reverse die break; hammering for 17K.

Lot 5014, a 1795 missing leaf Bolender 6 hammered at 87.5K.  I first saw this coin at the inaugural EAC/JRCS show in St Louis.  I sat and watched as John Dannreuther and early dollar specialist David Perkins analyzed the missing leaf and the mechanism whereby this may have occurred in the mint of 1795.  It was a true treat to simply be a “fly on the wall” and listen to their analysis and debate and that immediately made that convention a delight….not to mention the visit to the Newman money museum.  But I digress.  This early dollar has now found a new home... somewhere.

1796 had one of the true rarities, Lot 5024 hammered at 52.5K.  With two known one may scarce see another for years.  Personally, I wonder if others lurk somewhere given the somewhat subtle die characteristics…several dollars are easy to misattribute.

I could add several other interesting comments/favorites but will allow others to analyze and expound on this sale.  Congratulations are due for his assemblage of this extensive collection.  I expect the new caretakers of these coins will enjoy them equally well.

------
A final note from the editor:  Please, don't forget to submit your dime census to David Quint by sending him an email at dimecensus (at) yahoo.com

Posted by Editor, JR Newsletter at 8:02 AM No comments: