In regards to the 1836 O-105, I too have been puzzled by the corrugations. Souders makes no mention of it, but Overton says that it is not as visible on early die states, and gets progressively worse. Obviously, it is not a planchet defect since it is present on every coin struck by the die. For readers unfamiliar with what we are talking about, please see my example shown below, graded NGC EF-40. The area in question is at the bottom of the reverse, between the leaves and the 50 C. Perhaps this might be an interesting variety to study at a future JRCS meet?

(editor's note:  click on the image to enlarge it) 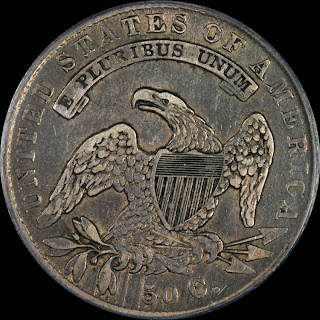 In response to Dick's question about the corrugated marks on  Reverse D  of 1836:  I have no idea what caused these marks, but I do have a further question.

Has anyone seen an O-121 with these marks, or an O-105 without them?  I have numerous examples of the O-105, all with the marks, but my O-121 does not have them, and I have not seen an image
of one that does.  I suspect that they might have been removed by lapping prior to the striking of O-121's.  (Granted there are not many examples of the O-121 to look at for reference.)  Overton states that EARLY states of the die show little or no evidence of the rays - but I believe he meant LATE states ??  The only other example of similar marks that I have seen is on the 1835 O-108.  These are referenced by Overton as "short vertical rays".


Steven Kawalec
------
Rick Andrzejewski wrote:
Early this week on eBay there appeared a possible once in a lifetime opportunity that someone won. The adage “you snooze, you lose”, well that was me. I never noticed it was a one day event. Who would offer a proof 1833 JR2 and an 1853 AR dime for only one day? I started researching if the 1833 JR2 are known in proof, yes. The seller had a no return policy and limited transactions (buys & sells) with only a few sells. I was thinking it was a counterfeit or highly polished (portrait was frosted). The JR2 are known with a die break on the obverse right on circulated issues but not on proofs. Picture (attached) was a bit dark but I couldn’t see any die breaks. After further research of the Reiver piece and rarity of the JR2, even if the piece was a polished or cleaned unc, I was going to gamble with an offer at least in the $700-$750 range. The next afternoon I looked for it to enter my bid, but couldn’t find it. I checked completed listings figuring it was taken down due to it being suspect, but found it SOLD for about $650!!!!!!!!!!!. If authentic and a proof, it was a buy of the century!!!

After reviewing further, I know I wouldn’t have chased it, but would have set a maximum bid of ~$1,000+ once I found out the Reiver piece in MS63 sold for over $5k. It looked like the bidder was a buyer/collector of bust dimes. Hopefully he is a JCRS member and if the coin is real, would share his story with us in an upcoming JCRS issue. Would be interested in comments from other busties once they review the photos.

(editor's note:  The photos below came from the ebay auction.  Also, you can view the closed ebay auction in a new window by clicking here) 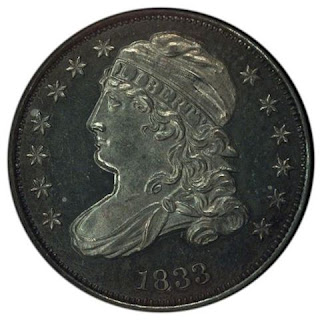 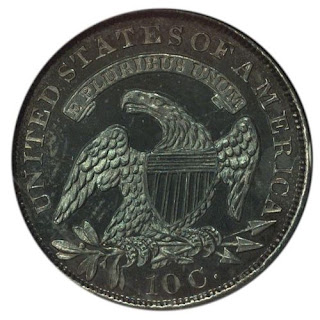