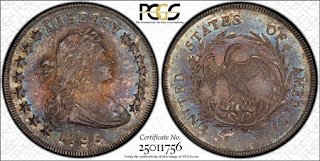 We have a number of contributions this week.  First, a question concerning half dollars.

The next issue of the John Reich Journal is being mailed this weekend to the membership.  This is the last issue for Volume 26.  You will find a dues notice in the envelope, please send your renewal check to JRCS Secretary Steve Crain in a timely manner.  Life members and members who have prepaid dues need not send any more money, but the Jules Reiver Literary Award ballot is on the reverse side of the dues notice.  Please vote for your favorite article from the last year.  The winner will be announced at the ANA meeting next year in Denver.

There is also another ballot in your envelope.  We are asking the membership to decide whether we should allow the Newman Numismatic Portal to digitize our journal for their research website.  We would reserve issues for two years before they would be included in the database to retain benefits to the membership.  This is a Yes/No vote with a simple majority ruling.  Please take the time to vote on this important issue and return it to Steve Crain with your dues check and Reiver ballot.

There was some discussion on this matter at the last two ANA meetings of the society.  It was decided by the board that a general vote was the best answer rather than allowing the members at the meeting to be the only voices heard.

There are, of course, pros and cons to the situation.  I would hope members on each side of the issue would post their thoughts here so undecided members can have some reference before they vote.  A couple of the issues raised include the ever expanding use of online research, especially by the younger generation of collectors.  It would be good exposure for the club to be included in the program.  Many of the other specialty clubs have already allowed their journals to be digitized.  The main argument against the issue is that it may devalue the resale value of the old journals.  The last couple of sets that sold are now fairly shy of the $500 mark, I think we have reached a "basal value" for the set.  Also, most of us are not really banking on the value of our libraries to fund our retirement accounts.

I am in favor of letting the Newman Portal digitize The John Reich Journal for use on their website.  How about you?

Happy Holidays to all and hope to see you at the FUN show in January.  Remember, we will have a meeting there including an educational presentation.

Early Dollars at the FUN Convention in Ft. Lauderdale, January 5-7, 2017

The December 2016 issue of Coin World reported that Bruce Morelan’s PCGS Registry Set of United States Silver Dollars 1794-1803 will be on display at the 2017 FUN Show in Ft. Lauderdale Thursday through early Saturday afternoon, January 5-7th.   This Registry Date and Major Type Set consists of 12 early dollars graded PCGS MS64 to Specimen 66 and will be displayed at the PCGS Table at FUN.  I’ve seen a number of these Dollars in the past, but never all 12 at one time.

The 1794 Dollar grades PCGS Specimen 66, and is the only 1794 Dollar known today with a silver plug center.  It is one of only six 1794 Dollars known in Mint State.

The 1795 Draped Bust, Small Eagle Dollar in PCGS MS66 is ex. Eliasberg where it was raw and graded MS-67, prooflike when it was first sold at public auction in April 1997.  Its pedigree can be traced to the June 25-29, 1912 Henry Chapman George H. Earle Sale.

These are only two of the highlights of this spectacular early dollar collection!  There are 10 more exceptional early dollars in the set, with pedigrees to match.  Here is the link to this set on the PCGS Registry:  http://www.pcgs.com/SetRegistry/alltimeset.aspx?s=87430

I will have six cases of early U.S. silver and other coins for sale at FUN, including approximately 45 early dollars in grades VF-Mint State, with most in XF-AU grades.  All are graded by PCGS.  Many of these dollars are the condition census to finest known for the die marriage, and many are plate coins in the second edition of the Bowers book on early dollars.  These silver dollars can also be seen on my website (website address below).

Heritage Auctions will be offering for sale at auction the Childs-Miller 1794 Flowing Hair Dollar in PCGS XF40.  This is a very original 1794 Dollar.  A preview of this lot is available online at Heritage Auctions:

Hope to see you at FUN!

We have also removed the enigmatic 1818 "B-11" variety from all sets, thus making it possible for collectors to complete a variety set by Browning numbers.  If an 1818 B-11 ever shows up or is confirmed, we will add it back in.

Posted by Editor, JR Newsletter at 12:50 PM No comments: