Welcome to the first post-ANA Denver edition of the JR Newsletter!  Hopefully we receive a few reports over the next week or two from those who attended the ANA Show.


You should now have or soon receive the latest issue of the John Reich Journal!  Unfortunately it was delayed due to mechanical difficulties at the printer. Their machine broke down and put everything behind schedule. Fortunately we were able to prepare the envelopes with mailing labels and postage prior to receiving the shipment. The journals were quickly stuffed into the envelopes upon delivery and went out in the mail later that day.  If anyone does not receive their copy in the next week or so please send me an email and I will send another as soon as I get home from the ANA and a short vacation.

This issue is a little larger than average and contains some wonderful articles. I hope each of you enjoys the issue as much as I have in bringing it to you.

I do need some content for the fall issue. Please consider writing something for inclusion in the next issue.

Even though I participated in David Perkins' auction of capped bust half dimes, a highlight in itself, THE BEST MOMENT of the ANA for me was a one-on-one interaction with fellow half dime collector Jim Carey.  For years, Jim has been collecting coins with cuds, especially capped bust half dimes.  I don't know how many times I have told Jim about a cud available on the bourse floor or up for sale on ebay.  Jim's passion in the hobby is for cuds.  Without going into too much detail (that will likely be saved for a future article in the JR Journal), Jim showed me a raw half dime for my inspection and evaluation.  Here is an image of that coin (photos by Todd Pollock):

Simply stated, this is only the second-known example of the 1835 LM-5.2 half dime with a retained reverse cud!  In-hand inspection revealed that the coin is of a later die state than the previously-unique coin shown in "Federal Half Dimes 1792-1837."  As much as it was great to see such a rarity in hand, the "best moment" of the show for me was not seeing the coin.  Instead, I got my greatest thrill with Jim's reaction when I verified for him that he indeed had a significant rarity in his collection.  Jim was thrilled to learn that his coin was an amazing find.  Jim and I promised one another that we would work on an article for the JR Journal in which we would document more about how and when Jim found the coin and its significance to the half dime community and to Jim himself.

I had a great time at the 2017 ANA World’s Fair of Money in Denver, and with my fellow John Reich Collectors Society (JRCS), ANA members, collectors, and dealers.


One highlight of the ANA for me was John McCloskey showing up at the JRCS meeting on Wednesday morning.  John and Russ Logan were the authors of Federal Half Dimes 1792 – 1837.  John was a also a co-author of Early United States Dimes 1796 – 1837.  At least one lucky JRCS member happened to have his half dime book at the meeting and was able to get John to sign the book and pose for a photo.  John was a long time officer in JRCS and also the Liberty Seated Collectors Club (LSCC).

John’s appearance may have been little bit of an omen as we had a successful Fixed Price and Sealed Bid sale of rare Capped Bust Half Dimes, with rare die marriages and remarriages, Condition Census Specimens, a fair number Plate Coins from the Logan-McCloskey book, and late die states (cuds!).  This sale was cataloged by Richard Meaney, and he was busy until Friday at 6:00PM at my table showing lots and talking with half dime enthusiasts.  At more than one time there were four or five collectors talking and viewing half dime sale lots at the same time!

Dr. Glenn Peterson hosted a meeting of the JRCS Bust Quarter Club.  David Lange from NGC was the guest speaker.  The subject of his talk was the newly discovered 1822 B-3 Capped Bust Quarter, a new die marriage of 1822 Obverse I and Reverse T with the “Broken Top Arrowhead.”  I made time to get away from my table to listen to David Lange’s talk.  Unfortunately the Discovery Specimen of this new quarter die marriage was not shown at this meeting, but you can view a photo of it on the copy of the latest issue of the John Reich Journal.

Another highlight for me was attending to Chuck Link’s presentation and talk Thursday afternoon at the Bust Half Nut Club General Meeting.  There had to be over 50 people in the room.  Chuck Link’s presentation was titled, “Collecting Liberty Capped Half Dollars and Stories Along the Way, a Journey with Friends.”  Chuck shared a number of stories about the acquisition of rare and choice CB Half Dollars, and those who helped him in his Journey.  I have a pretty nice 1807 “Beard Goddess” half dollar in my collection but Chuck topped this by having three high Condition Census examples in three different die states (photos below)!  Here’s a link to Chuck’s Capped Bust Half Dollar PCGS Registry Set:  https://www.pcgs.com/SetRegistry/half-dollars/early-half-dollars-specialty-sets/capped-bust-half-dollars-prime-die-variety-set-by-overton-circulation-strikes-1807-1836/alltimeset/93314 .  Chuck’s talk was captured on video by the ANA. [I’m not sure how one might go about trying to find and view / listen to this video.]

Chuck Link also shared a slide on his recently acquired copy of the Beistle book on half dollars, a copy formerly owned by one of my favorite research subjects, Col. E.H.R. Green.  The book was inscribed in 1929 to Col. Green from Beistle inside the front cover.

I unfortunately had to miss David Finkelstein’s presentation, “The 1,758 1794 Silver Dollars: Recently Found Mint Documents Dated 1794 and 1795.”  Fortunately I talked with David earlier in the week and he filled me in on some of his new findings.

As always, I enjoyed talking with the many collectors and dealers that attended the show.  Collector and Numismatist Jimmy Hayes knows of my interest and research into current and former collectors and collections of early dollars 1794 to 1804, and in particular Frank M. Stirling of Baton Rouge, LA.  At the show Mr. Hayes gave me as a gift an old business card of Stirling’s that I had never seen before.  My friend Jim Matthews pointed out the 1795 Flowing Hair Dollar photo on the card was the obverse of the R-8 1795 B-16 Dollar.  I have seen this coin and it remains with the Stirling family to this day.

This too may have been an omen as toward the end of the show I was able to place the unique 1795 B-21, BB-28 and the R-7, 1795 B-8, BB-15 Dollars from the Warren Miller Collection with a new early dollar collector.  The 1795 B-8, BB-15 Dollar is the finest known specimen by far and has passed from early dollar collector to early dollar collector over the years, starting with F.C.C. Boyd (1945 World’s Greatest Collection), Adolph Freidman, Milferd H. Bolender (and the Bolender Plate Coin), K. P. Austin, Alfred and Jacque Ostheimer, H. Roland Willasch, Jim Matthews, and Warren Miller.  As Andy Lustig and I purchased the Miller early dollar collection I guess you might say that technically Andy and I have owned the coin (if only for a year or so)!  For more on this coin and the rare 1795 Dollars please see my article, “The Story of Bolender’s 1795 Flowing Hair and Draped Bust Dollars” in the latest issue of the John Reich Journal (Volume 27 / Issue 2) on pages 29-38.

All in all a great ANA! 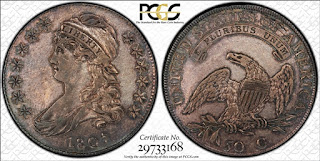 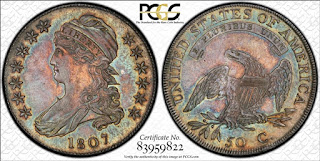 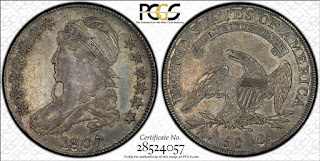 Posted by Editor, JR Newsletter at 1:59 PM No comments: