Multiple contributions this week, almost something for everyone here!  Remember, most images in this blog are shown here in reduced size.  If you click on the image, you can view an even larger version of that image (and many images, if you click on them again once they open as larger images, will get even larger still).
From Jim Koenings:
One hundred copies of Jim Koenings' book "1824 JR-2 The 6th Rarest Capped Bust Dime Die Variety" have been printed. Besides having 37 pages with color photos, there is a foreword by Louis Scuderi, comments by Kirk Gorman on dime edges, comments by Van Walworth on counterfeits and some new information on grade distribution of 1824 dimes. 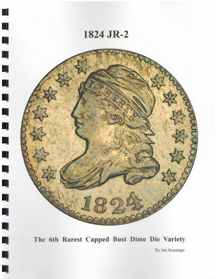 This book is now available at $24 each, including shipping. If you would like a copy, please send a check or money order to:
Jim Koenings
P.O. Box 2382
Riverside, CA 92516

If you would like your copy sent even sooner, you may send a payment to PAYPAL at Jim's email address:  bustcoin1 (at) verizon.net
Thanks
Jim
------
From Rich Hartzog (response to last week's JRN):


"It included the Tony Terranova collection of counterstamped coins and hands down there has never been anything like it sold at auction."

Not to toot my own horn too much, but the Terranova collection of counterstamped coins is a distant second to the Brunk collection, which I sold in my World Exonumia auctions 9A, 10 and 11 (1999-2006). Granted, the prices of this 2010 sale are current, while mine are now somewhat dated.  Tony purchased a number of pieces from the Brunk sales, as can be seen in the Stack's notes.  The Brunk sales included a number of very rare pieces, all sold without reserve or minimum bids.  Obviously that gives a much truer report of the real market, vs. selling at the reserve.  Stack's did a decent job, with only a few incorrect photos, and got great money for most items.

I also have the Brunk 2003 book, the newest edition, available on my web site at www.exonumia.com .  Brunk has severe eye problems and is unable to respond to mail, email or phone calls.  He is working on a new edition, but it is unlikely to be produced in the near future.  I do have copies of the Brunk c/m collection auction catalogs, with prices realized.  Contact me at hartzog (at) exonumia.com
------
From H. Craig Hamling:
To Dick Kurtz
I have never heard of a perturb.  Can you enlighten me?
------
From David J. Davis:
A quick follow-up to the EUSD book.  I just checked Rich Uhrich's webpage, and sure enough there were three copies for sale.  For one still in shrinkwrap, how about $400?  For one slightly used he is asking $325.  For another used one with some markings, etc. and no dust cover the price was $195.  Those prices surely surprised me.  I obviously have not been aware of what is happening in the market place.  I thought the price I heard awhile of $250 for a book, was a bit much.  No wonder the book dealers are pestering me to see if more books for sale.  I may have to go digging around in my storage areas to see if I missed one or two.
Interestingly enough the Charlie Davis Mail Bid Sale, October 30, 2010, has an estimate of $150 for the regular edition, and an estimate of $250 for the deluxe edition.  I can hardly wait to see what each book brings.
I would also like to let everyone know that if their dime book doesn't have the errata sheet with the correct pictures for 1821 JR-13, or needs a new cover, I still have both of them available for the cost of postage.  I have more of the errata sheets available than covers.  As we printed enough errata sheets for all of the books, there must be a lot of books stashed away without the correction.  Just to be sure in my own mind I looked up the spelling of errata and learned a new word for the day.  The definition read; "a list of corrigenda or a page bearing such a list.  Then I had to look up corrigendum to find its definition; "an error in a printed work discovered after printing and shown with its correction on a separate sheet bound with the original."  Corrigenda is the plural form indicating more than one error.  You just never realize the discoveries that can be made when referring to the dictionary, instead of just using the spell checker.
Happy collecting,  David J. Davis
------
From Dennis Villanucci:

I have decided to offer for sale the counterstamped 1806 B-8 R6 quarter that I uncovered in a local shop this past summer, and subsequently reported on in the September JRNews.  That earlier report is as follows:
"Recently, I came across an interesting counterstamped 1806 Bust Quarter.  The counterstamp is partly worn off, but it appears to read "NC US".  Can anyone help in identifying this stamp?  The host coin is B-8, apparently an R6 with 20 or so pieces known.  The die crack at the lower left reverse is light, and has not yet formed the cud that occurs in the late die state."
I offer the additional description that the coin the coin may have been lightly cleaned at some point in its lifetime, but there are no hairlines. It’s a little abraded and unevenly worn from the counterstamp.  In my opinion, the coin has the detail of VG-10. A picture is included here. 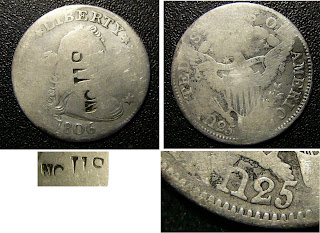 A few collectors have expressed an interest in acquiring this piece, and I have decided to let it go to the highest bidder (without bid reduction).  I have no inclination to use eBay or any of the other auction houses to place the coin. Those interested should send their offers to me at dpvilla (at) aol.com.  If you would like to discuss the coin before bidding, just send me an email and I’ll forward my phone number to you. The winner will have a 5-day, no hassle return privilege with immediate refund of the full purchase price. I will be accepting offers until midnight on October 23.  Thanks in advance to all.
------
From Brad Higgins:

Here are 3 images from the Philadelphia archives; the first and third need no explanation. The second is an estimate of the expenses of the engravers department. Each year, the Secretary of the Treasury sent a letter to the mint director asking for an estimate of expenses for the following year. This was Robert Scot's estimate for 1796. Note the salary of the assistant engraver compared to what Reich was offered more than a decade later.
There were a number of the SecTreas inquiries in the archive but no subsequent copies of the mint replies. Perhaps in the DC archive in the Treasury Dept records there is more. 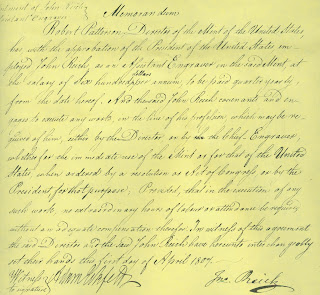 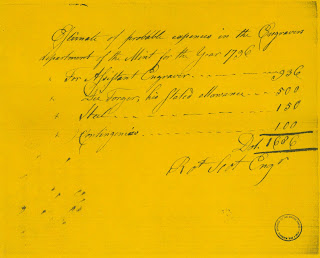