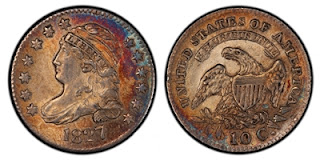 I agree with Brian, as I personally use P/N/A for certified coins and R for raw so IF its decided to add TPG data to the census this might be simplest.  P45, R35, etc.

Perhaps more importantly, we need to keep provenance data with our coins.  At EAC this year, there was much discussion about counterfeiting...primarily of copper coins.  A rare coin will be purchased and a real coin will be overstruck with a die made from that example then often worn down and passed off as genuine.  This is a danger to our hobby and its only a matter of time before silver is more widely exploited per the experts.  Our best defense is to keep good pedigree records IMO.

My ten cents on the holder/census issue for the readership to think about.

Not really certain what designating the grading service does other than taking up room in the census. And then what's next? Ranking based on number of PCGS, NGC or ANACS holdered coins? Ranking PCGS coins higher than NGC coins or vice versa? Is that what is really important? Is a raw XF-40 coin inherently less valuable to the "collector" community than a holdered XF-40 coin other than the fact that it is in a piece of plastic? I can understand the difference from an investment point of view but it is still my understanding that the official name
of our society is the John Reich "Collectors" Society. Has that been changed to John Reich "Investors" Society?

I would suggest that before any change is made to the census format that we also think about the oft quoted "buy the coin, not the holder".  I've seen far too many coins in holders that are excellent examples of grade inflation and some times significantly so. I also see significantly undergraded coins in holders and buy them when I can.

I personally prefer (and it is just my preference) my coins unholdered and trust that my 30+ years of grading experience collecting all of the capped bust silver series trumps the experience of 3rd party graders. In my opinion, and it is only my opinion, if you do not study the early series in depth you often do not get grading of the early US bust coinage right. To do so consistently you must understand strike, die wear and a number of other die marriage specific indicators that impact the appearance of the specimen.

Hopefully this will generate some interesting discussion and perhaps a few comments telling me how wrong I am! So be it. The important point here is to have the discussion.

The final contribution for the week came from Steve Herrman:

The 4th revision of Auction Prices Realized for Certified & Graded Bust Half Dollars 1794-1839 (APRCG) shall be available in mid-June.

The 2016 APRCG contains prices realized for all certified and graded Bust Halves sold in major auctions over the past three years, June 2013 through May 2016.

Copies will be mailed to JRCS members with an enclosed invoice. Advance payment is not required.

Note: $1.00 shall be donated to each the JRCS and the BHNC for each copy sold.