Re: Jim Matthews' analysis of the 1836 proof lettered edge... thanks for the insights ! I gotta tell ya... the phrase "blizzard of great coins" is a vivid metaphor for us drought-stricken Texans !!!! Bring on the blizzard !!! 103 degrees F again today ! heh
The closest we get to a blizzard is at Dairy Queen.
My very best to all,
Ricky B
------
Harry Cabluck wrote:

Thanks, again, and again, for publishing.

Oddly, it arrived while attempting to attribute this 1836 $5 gold for a friend.  Perhaps you'd like to see it.

For now, must use only the Breen Encyclopedia.  Alas, sold all the Akers books years ago. 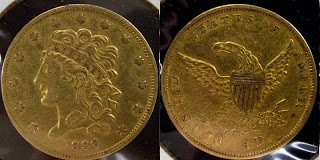 ------
editor's note:  Click on any photo posted in order to open the photo as a larger image.

Jason Poe wrote:
Just bought a neat coin I'd like to show off, from the recently concluded Heritage Summer FUN auction. It is an 1834 H10C MS64 Prooflike NGC. V-1, LM-2, R.1. This tiny little coin shines with strongly mirrored surfaces, over which the most attractive blue toning has formed. The reverse is far more reflective than the obverse, but both sides definitely qualify for prooflike. This piece is totally original. The prooflike characteristics seem to have been formed by die polish, as evidenced by die polish lines covering both sides. The strike is quite strong, with all stars fully formed.

I am an avid collector of prooflike coins, currently working on assembling a prooflike type set, which can be viewed on the NGC Registry. If any of y'all have any prooflike coins, I would love to see them. I would also like to hear any information you might have on early prooflikes - observations on availability, theories as to how they were made, etc.

------
Paul Hybert wrote:
The latest newsletter listed the JRCS morning meeting on Wednesday at ANA, where the educational session will be "Half Dime Remarriages and Cuds."

But that is not the only early US coinage presentation on that Wednesday.  At 4PM in the Numismatic Theatre, the scheduled talk is "Reverse T: A Workhorse Die of Bust Half Dime Remarriages."  The title seems to say it all, but maybe the speaker can give us a preview?

Paul Hybert
editor's note:  Yes, Paul caught on to what I am doing!  I will be hosting the numismatic theater presentation Paul mentioned.  I intend to use the educational session at the JRCS meeting as sort of a warm-up or "teaser" for the more in-depth presentation on half dime remarriages later that same day.  Some quick background:  We know with certainty that quality die steel was in short supply.  We know that this (and other factors) resulted in the early US Mint's extensive use, and overuse, of dies that were considered "serviceable."  The "forensic numismatic research" completed by some remarkable numismatists has shown us all sorts of die marriages, die remarriages, and die deterioration characteristics that make our hobby even more interesting.  It was quite common with the capped bust half dime series for the early dies, especially the reverse dies, to be used, reused, and used again all the way up until the die suffered some catastrophic failure (which we now call a cud).  So it is my intent to show the paths that some reverse dies followed from their first use until their final use as a way of demonstrating the concepts of die marriage and die remarriage, while also highlighting die deterioration that occurred up to and including final uses of dies giving us the cuds many of us cherish today.
------
Jim Matthews wrote:

I remember back in 1971 a few years into collecting coins that I always saw far more coins I wanted to buy than I had money for. Back in that period of the prehistoric dawn, lunches at school could be had for 35 cents. I knew that my own starvation was not a particular concern of mine, and could often manage to skip lunch and allow myself more spending money to buy coins. At a more rapid pace I was able to fill my album of Lincoln cents and Franklin half dollars with my skipped lunch money. I had the freedom to ride my bike up to the hobby store and come away with new treasures weekly.

Of course, the era of inflation was underway, when candy bars suddenly jumped from a nickel (a commonly used term to denote our mint's and Coin World's "Five Cent Coin" descriptor) to a dime. Fancy that. Indeed, well, this fit hand in glove with my own recognition that the actual silver coins (dimes, quarters and half dollars) of 1964 and prior were disappearing from circulation. Although I was not driving at the time, it was burned in my memory of the 1960s that a gallon of gas could be had for about 25 cents-- a silver quarter--often with heaps of S&H green stamps or Blue Chip Stamps if one didn't mind going to a particular gas station that was giving away multiples of stamps for each cent of gas purchased. Said stamps could be collected, stuck in books and traded for what was believed to be valuable merchandise! Warren Buffett himself took a minority interest in the Blue Chip Stamps company--feeling it was a sure thing into the future. Some things just don't work out as we would like them to.

In time my numismatic interests stretched into the early Federal coins, usually silver as that was what I could afford. The half cents and large cents were so widely collected that I didn't feel I could discover new things in the same way I could with early silver coins. Gold coins of that era were just too expensive, and still are for my collecting ability. Curiously today, I would still forgo lunch if it would help me buy coins, just as today I often simply forget to stop at the ANA show or a similar event, as seeing the opportunity to hunt for the treasures as far more fun than just another over cooked hot dog or bland sandwich.

I note a silver quarter still buys a gallon of gas today--but not the copper-nickel ones we commonly use today, last time I checked I needed about 14 of those "new" quarters to accomplish the same thing as one of those old silver quarters. Fancy that!
Posted by Editor, JR Newsletter at 10:34 AM No comments: