Here is an important contribution by Paul Hybert for those of you who will be voting for the Jules Reiver Literary Award:

I think the ballot for the Jules Reiver Literary Award is missing two articles:

"The Missing Piece: The Terminal Die State of 1830 Obverse 1 Dime" by Louis Scuderi

(Editor's note:  If you write in either article on the ballot, I'm sure your vote will be counted!)

Dave Perkins sent us the following:

In the latest issue of the John Reich Journal (Volume 23 / Issue 1) on page 40 there is a one page article on a newly discovered specimen of the 1806 O-127a half dollar die marriage in PCGS VF25.  This specimen is likely one of the two finest known, the other a specimen also in PCGS VF25 owned by a JRCS member.  According to Steve Herrman this die marriage is currently rated R-6+.
This specimen was purchased by Vic Bozarth of Bozarth Numismatics, Inc. of Brenham, Texas and was unattributed as to the die marriage.  As noted in the article, the coin was sent to “JRCS member Mike Clark who had the enjoyable task of attributing and discovering a new specimen of this very rare die marriage.”  Congratulations again to Vic and Mike on this discovery!
At the time I submitted the article I did not have a photo of the coin, nor did I until Ron Guth, President of PCGS Coin Facts kindly sent me the following note on Monday morning, April 30th, with links to photos of this specimen which PCGS had taken when they graded the coin.  A photo of this new specimen is also provided below (courtesy of Ron Guth and PCGS).
Hi David,
I noted your article in the John Reich Journal about the new specimen of the 1806 O-127a Half Dollar.  If you have not obtained a picture of the coin yet, you may view one at http://www.pcgs.com/Cert/25034495/ or on PCGS CoinFacts at http://www.pcgscoinfacts.com/Coin/Detail/39335 (where we also show a F12 example).
Best wishes,
Ron Guth
President
PCGS CoinFacts - the Internet Encyclopedia of U.S. Coins
www.PCGSCoinFacts.com
Thanks Ron!   Please note there is also a photo of a specimen of this die marriage in PCGS F12 if you click on the second link that Ron provided.
If any non-JRCS members would like a copy of the JRJ article, I can send a one page Word File with the article.  Please e-mail me at wdperki (at) attglobal.net to request this and I will forward a copy of the article to you.
This specimen will likely be offered at the 2013 ANA Convention in Chicago in a Sealed Bid Sale.  Questions on this should be directed to me at wdperki (at) attglobal.net
W. David Perkins

Image of the coin: 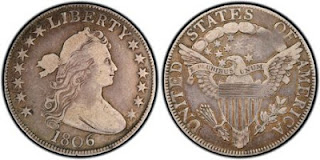 From the weekly EAC newsletter, some sad news reported by David Berish:

It is with a heavy heart that I inform you and the EAC community of the passing of my good friend Bob Hammond  EAC #5351.  Bob suffered a massive heart attack on April 22 from which he did not recover.  He was an avid coin collector for most of his life, collecting just about everything.  In recent years, he became an EAC member and attended several of the annual conventions, along with his wife Shirley.  (Shirley may be known to some as the `Cookie Lady' for her habit of bringing plenty of home-made cookies to coin club meetings & gathering.)

Bob & Shirley had plans to attend the upcoming convention in Ohio.  Bob collected coppers, but his great love was liberty seated coinage, of which he had many fine specimens.  In addition to being a member of Early American Coppers, Bob was also active with the Liberty Seated Collectors Club, as well as the John Reich Collectors Society.  He was a great friend, and he was the one that introduced me to coin collecting.  Without his mentoring over the years, I might never have come this way.  He will be greatly missed.

Here is a picture of Bob and Shirley Hammond: 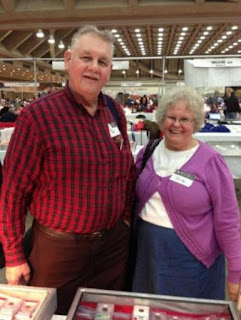 Thank you for forwarding the notice about the untimely passing of friend Bob Hammond. I became aware of that earlier in the week, and have been in touch with Shirley to offer my condolences and help. Bob was a good friend and fellow half dime collector, and his smiling face and friendly greeting will be sadly missed by all who knew him.  We have lost another great collector and friend.