Brad Karoleff announced that the latest issue of the "John Reich Journal" has been mailed.  Any member of the JRCS who has not received his or her copy of the journal within ten days of this announcement should contact Brad via email at bkaroleff (at) yahoo.com
Posted by Editor, JR Newsletter at 8:09 AM No comments:

Editor's note:  You can click on the images in this week's JR Newsletter if you wish to view the images in a larger size
Brad Karoleff wrote:
In last week's newsletter Gary Rosner wrote:

The 1825 Half Dollars have two different obverse master dies for the
year. In Bust Half Fever they are numbered obverse master dies #4 and
#5. Can anyone tell me which obverses are from the newer master die #5?
In Overton, Peterson, and Souders they all mention that some of the
obverses are form the new master die but none of them specify which
obverses. There are 15 obverses for 1825 and one book mentions that 4 of
the obverses use the new master die #5. I’ve tried to figure it out from
the pictures in Overton but have had a hard time distinguishing between
the two master dies. In my collection I only have an O-101, 105, and 110
in the VF-XF grade range. Anyone's help would be appreciated.
Thanks,

In my monograph, Bust Half Dollar Bibliomania, I listed all the marriages from each master die.  They are:

I hope this helps answer some of the questions.  This is the last information I have and think that it is still correct.  Does anyone have another opinion?

Brad
------
Alan Bricker wrote:
"Jules Reiver introduced me to RE Bust Half Dollar die marriages around 1987 during one of our kitchen table chats and I was soon hooked. By about 1995 I had identified and described for Jules at least a half dozen additional RE half dollar die marriages not listed in his 1988 VIM, including the 1838 "JR-21" which I subsequently shot down as merely a die state of his JR-13. In addition, I shared my opinion that his 1837 "JR-28" did not actually represent a new die marriage. The point here is that these studies were works in progress and therefore always subject to revisions, not unlike the sort of numismatic hairsplitting inherent with the late date large cents."
Alan Bricker
------
Winston Zack wrote:
I was hoping to get opinions from the JR Newsletter crew as to what may be going on with my 1802 JR-2 Draped Bust Dime from 4-6 o'clock on the obverse.  I know the coin is well worn, but the diagnostics are present to attribute the date/die marriage, even with the last digit obscured.
I am not primarily a Draped Bust Dime collector but I do love Cuds.  When I saw this piece I bought it because the area in question looked very much like a Cud.  The area is raised on the coin, but after I went to reference my EUSD and other resources I could not find such a feature mentioned anywhere.
So I am calling on the collective minds from this organization to give me their best opinion based on the photos provided.
Thanks,
Winston 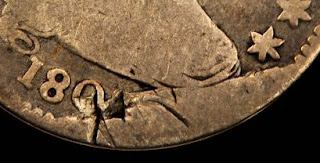 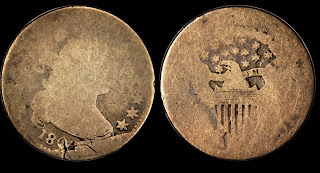 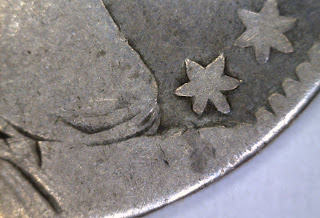 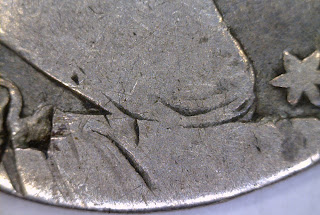 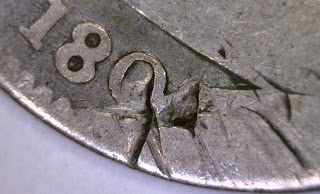 ------
Nathan Markowitz wrote:
A reminder:
The 2011 EAC convention will be held at the Doubletree Hotel in Portland, Oregon.  For the first time a JRCS member(yours truly) will co-host this event along with EAC VP Bim Gander.  I would like to encourage all those who can make the trek to attend.  These shows are a tremendous opportunity to focus on early American coinage w/o the distractions often associated with a larger show.  Portland is in peak bloom and I am happy to share information about Portland, the coast, or the mountains to any prospective attendee.  We have made arrangements to rent a safe T deposit box so you can store your coins you bring to the Happenings display should you chose to bring along your spouse/family and extend your visit.  Please contact me at cascades1787 (at) yahoo.com if you have any specific questions about the convention or the Pacific Northwest....
Here is the tentative program; all events except Saturday copper auction and Friday keynote speaker dinner are FREE and open to JRCS members...
Thursday May 12;  5 PM reception (eat and meet); 8PM Happenings...show the varieties Brad Karoleff mentioned (Please consider sending along a coin or two IF you can't make it)
Friday May 13:  Bourse (about 60 tables almost solely early copper/silver.  Educational seminars and keynote speech.
Saturday May 14:  Bourse.  Educational seminars.
The educational seminars are a mix of silver, early copper and colonial talks.  There are also talks on early copper/silver valuation; grading.  Please consider giving a talk at one of these shows; they are very well received by our copper brethren!  A schedule will be posted within the next couple of weeks.  PDX airport is just a short light rail train ride from the host hotel.
DISPLAYS:  Please contact me ASAP if you are willing to do a display.  I already have a few terrific silver displays to complement the copper on show....but I am running out of time to go to press for the program and we have an unusually large bourse.  You get your own case, own key, and there are not a bunch of rules like at the big shows. Lets wow the copper folks....early silver, early gold, or a literature display would be great.
Sunday May 15:  Bourse, wrap up.
As you can see from the schedule Thursday evening until Saturday afternoon will contain the majority of coins and talks of interest to our fellow members.
And remember, NO SALES TAX in Oregon...folks come here just to shop...
Posted by Editor, JR Newsletter at 8:09 AM No comments: