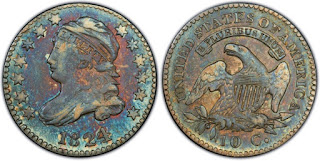 I have a limited number(6) of the half dime books new condition, never opened, for sale.
They are $175 each plus shipping.  You can choose either book rate or Priority.

Email me at bkaroleff(at)yahoo.com to order yours.  Please include your shipping address and postage choice.

I was thinking the other day about the time five John Reich members played “Old Dollar Whist,” as termed by Bill Luebke.  For those of you who don’t know Bill, he collected the early dollars by die marriage with over 100 marriages when he sold his collection, and importantly was the founder of JR News (along with “Jazzy Cat!”).

The rules are pretty simple, and are laid out in Penny Whimsey, a book on early American Large Cents by William H. Sheldon.  While the book describes old cent whist for Large Cents by die marriage it certainly can be applied to other denominations of early U.S. coins collected by die marriage, from half cents to early dollars and gold.  Here is the description from page 336 (1965 Printing):

“The late Dr. George French, who brought together one of the most famous collections of early cents, loved to compare and match his collection against that of others.  He invented a game which he used to call old cent whist.  It was a game usually played by two and the idea was to score points against an opponent’s collection.  Each of the known varieties then numbering about 270 [for Large Cents], was taken up in order.  You started with the Chain AMERI. Variety, which is the 1-A of 1793, and you put your coin up on the table.  Your opponent in turn produced his Chain AMERI. and the two pieces were compared to determine which was of superior condition.  Possession of the variety, in any condition, counted one point.  Possession of a piece superior to that of your opponent counted another point.  So, for each variety you could score one point, two points, or no points, as could your opponent.  If you had the variety and your opponent lacked it, you beat him two to nothing.  If he had one, but inferior to yours, you beat him two to one.  If his coin about tied yours in condition, you each scored one point.”

Here is a John Reich Journal article from August 2006 written by Bill Luebke about a game of “Old Dollar Whist” played in 2006 with five players, all current John Reich members and collectors of the early dollars 1794 to 1803 by die marriage.  The story begins on page 35 of the Journal.  You can quickly bring this article up on your screen by clicking on the link for Volume 17 / Issue 2 as archived on the Newman Portal.

I hope you enjoy reading this article by Bill, and hope it encourages collectors of early half dimes, dimes, quarters, and half dollars to maybe give it a try someday.

Posted by Editor, JR Newsletter at 5:00 PM No comments: