Dennis sent this information in, pretty interesting stuff.  Readers can click on the photos provided at the end of the text in order to see much larger images of the coin.

I came across an interesting (possible counterfeit) 1824/1 Bust Half Dollar at a local show in N.H.  Maybe the readers of JR Newsletter will be interested in hearing about it. (Pic attached).

The coin has what appear to be large rim cuds on both obverse and reverse.  All of the devices are very sharp (unlike a casting), and the piece has the ring of a genuine coin. It does not look like German Silver, (the color is a natural medium gray).

Both obverse and reverse dies are an exact match to Overton 101. I have made  photographic overlays of this piece and of a genuine O.101, and the match is identical for both obverse and reverse.  The reverse die cracks that appear on late states of a genuine O.101 near the rim cannot be seen on this piece due to the heavy wear.  To my knowledge, no known genuine 101 has die cracks in the areas of the cuds shown in the picture.  Also, no Capped Halves are known to have rim cuds.

Close examination does show slight roughness and pits around the date and some stars (similar to a cast copy), but these could also be due to corrosion.  If this is a cast piece, how could it develop features that look like cuds?  (The letters in the word 'STATES' appear "raised" and weak, as would be expected on a cud.  Also stars 1 and 2 on the obverse are raised.)  Coincidentally, I also own a cast copy of O.101, and as expected, the devices on that piece are very mushy and indistinct, and the surfaces are rough all over.

I suspect that this piece is a counterfeit that was struck from dies prepared from a genuine coin.  Somehow, all of the devices were perfectly transferred to the die from a genuine piece.

I'd be interested to hear what others have to say about this coin.

Editor:  I have added some additional photos to this post.  Dennis sent edge photos and photographic overlays of an 1824 O-101 over his coin to show that they match exactly. 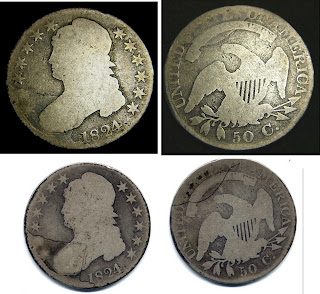 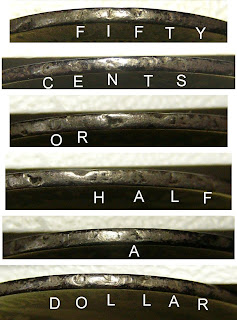 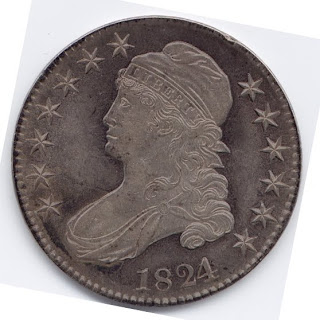 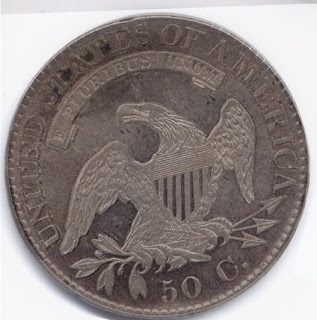 Posted by Editor, JR Newsletter at 8:23 AM 9 comments: