We have two contributions this week.  First, Tom Little wrote:

Does anyone have a link to the JRCS Baltimore show meeting on the 1815 and 1825 L and E quarter discussion?

A number of JRCS members are still at the 2016 EAC Convention in Charlotte.  It has been a fun show, with members of JRCS, EAC, and C4 (Colonials) all getting together for 4-5 days talking and sharing information on early U.S. Coinage, buying and selling coins, attending educational talks, etc.  This is a large gathering of knowledgeable collectors, dealers, and Numismatists.

Thursday night was what EAC calls the “Happenings” event.  There were four meeting rooms, with one each for Colonials, Half Cents, Large Cents, and Silver coins.

There were four examples of the 1798 B-11, BB-111 Dollar, all struck from different die states.  Three were from the Warren Miller collection that is being sold, with the fourth a very late die state example from my collection (still “raw, and stored in tissue paper in a 2X2 envelope!”) The earliest state present had a bulge in the right obverse field, and the latest die state had a double die break through Liberty to the right stars and rim.

The 1819 B-4 Quarter in the late die state is a favorite coin of mine, despite my first love for the early dollars 1794-1803.  I have an example that I acquired from JRCS member Mike Clark when he upgraded his coin.  It has one of the neatest die breaks I’ve ever seen, this specimen a heavy double die break through the date.

Even lovers of early U.S. Copper were impressed.

The show closes today.  Next year’s show is in historic Philadelphia. 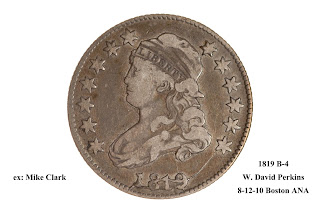 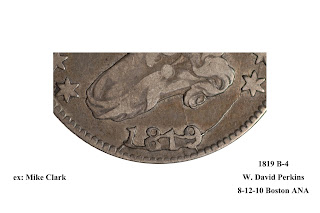 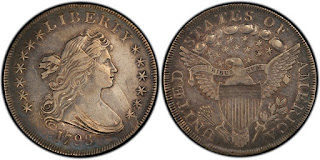 Posted by Editor, JR Newsletter at 12:47 PM No comments: